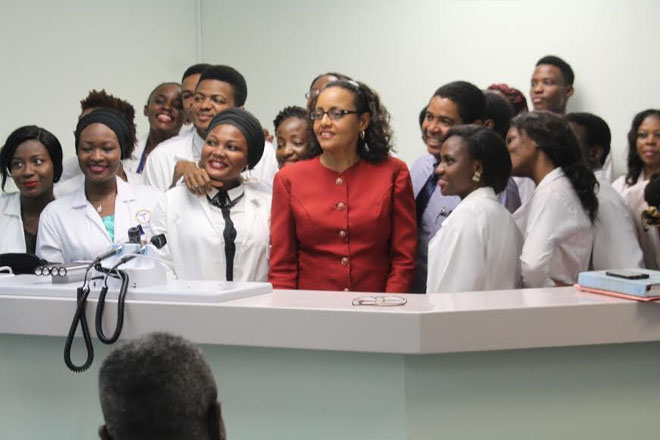 (ZIZ News) – The Joseph N. France General Hospital was on the receiving end of several pieces of equipment courtesy the students of the Windsor University.

Medical Chief of Staff, Dr. Cameron Wilkinson said when the students rotate in surgery, he encourages them, in his capacity, to give back and help to maintain the bridges they crossed.

“With the funds we were able to purchase 9 otoscope and ophthalmoscope units; these will help the physicians do examinations of the eyes, ears and address common emergencies like ear infections, foreign bodies in the ear and eye diseases in a timely manner. One would replace each on the medical ward, the surgical ward, the paediatric ward, the operating theatre, the emergency room, Pogson Hospital, Mary Charles Hospital, the Cardin Home and the prison,” Dr. Wilkinson stated. “Combined with funds from the first concert, we also purchased another EKG machine which is portable and attached to a laptop and this will be added to the EKG departments that we can do EKGs on the patients who cannot come to the EKG department and a sick on their beds so the person will simply go to their wards and do the EKG there.”

Meanwhile, Minister of State in the Ministry of Health, Honorable Wendy Phipps said the government is very grateful for what she considers a “generous and caring donation” to the health infrastructure of St. Kitts-Nevis.

She said, “Medical equipment are not cheap. A part from not being cheap they become obsolete very fast. What you use six months from now is something that might not be able to be used by December 2016 and that is the reality of how things are. And of course we can’t afford to use outdated equipment and technology on today’s patients because we are more discerning and the diseases and illnesses are more intricate and the response in terms of bringing primary health care to those who need it, so of course we need to be always on the top of our game.”

The students hosted a concert to raise additional funds, after the first concert returned EC $10,000 thousand and the second brought in EC $15,000.

The students raised over $30,000 which went to such things as fetal monitors, otoscopes, ophthalmoscopes and light sources used in examinations.