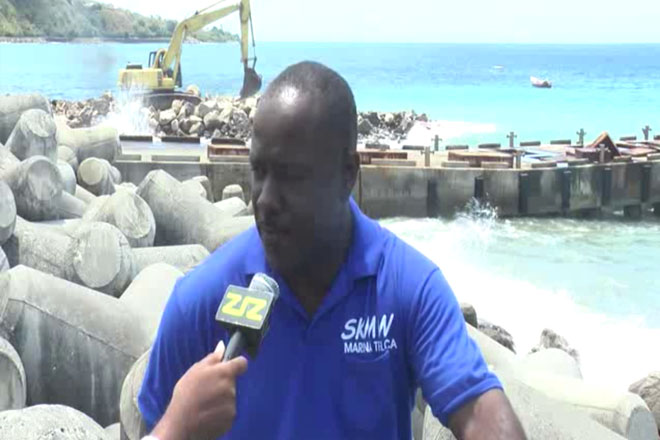 (ZIZ News) — Work has begun on the Old Road Jetty to address a number of concerns raised by fishermen and other residents.

For about one week, heavy trucks have been transporting boulders and other building materials to the jetty behind the Old Road Fisheries Complex to extend two sections and form a breakwater.

St. Kitts Marine Works Limited is the lead company in the initiative. Its Director, Regiwell Francis, explained the need for a breakwater.

“Any normal day, like now, the conditions are too rough for the fishermen to use the dock. With a breakwater in place, you’ll have an area of calm so then the boats can come to the dock and offload their cargo. We’re looking at putting in an 80 foot pier as well as a second breakwater to make the area similar to what we have at the boatyard at St. Kitts Marine Works. So the fishermen can come in here on a regular day, keep their boats tied up, offload their cargo, back and forth,” he said.

Francis is working with other local companies and the government to complete the project. He said it is important to get local entities involved so the economy can benefit.

“We think it’s important because this money goes right to the economy and that’s what we need right here in St. Kitts right now. A lot of good projects, a lot of things going on but we need to get more projects emphasizing using local folks.”

He commended Parliamentary Representative for the area, the Hon. Lindsay Grant for getting on board and supporting the expansion project.

“After taking power, Mr. Grant approached me and asked what can we do to get this problem solved. I pointed out that we had the repairs being done but after discussing with the fishermen at a town hall meeting, we needed a breakwater as well. Because having the piers repaired alone with the rough waters that you see can’t do it. And Mr. Grant was key this thing and saying ‘What can we do Reg? We need to get this thing going fast forward,” Francis noted.

St. Kitts Marine Works has also teamed up with the Japanese Government to fix holes in the pier and upgrade the Old Road Fisheries Complex. This includes replacing the old drains that have become clogged up and overgrown.

“We’re gonna do the repairs to the drainage on the East and Western sides of the property. We have a switchboard inside that caught fire in the past. We’ll be repairing and replacing that and also some drainage inside the facility. So at the end, this whole fisheries complex will be nice and usable for the Old Road folks,” he explained.

Francis said the projects are being done in phases and the breakwater should be completed in about three months.