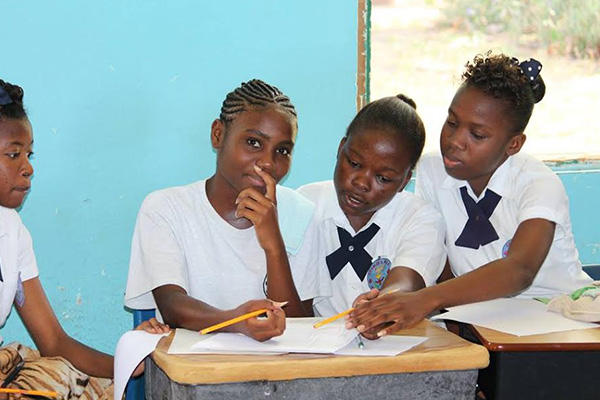 Basseterre, St. Kitts (SKNIS): More than 150 young people in St. Kitts spent the past week learning about the dangers of HIV/AIDS as well as the value of leadership as the Department of Youth Empowerment continues to engage adolescents.

The first engagement took place from February 17 to 21. Staff from the department collaborated with officials from the National AIDS Secretariat of the Ministry of Health as well as the local chapter of the Caribbean HIV/AIDS Alliance to visit each high school where they broke down some of the myths related to HIV/AIDS.

Sharon Cannonier, an intern at the Department of Youth Empowerment, told SKNIS that the topics included general facts about HIV, living with HIV, stigma associated with HIV and information on other sexually transmitted infections (STIs).

“It went very well,” Ms. Cannonier explained, adding that the 13 to 18 year old participants had some familiarity with the topics from health and family life classes. However, the facilitators were able to reach the audience using more interactive techniques. “A lot of them said that they definitely enjoyed the sessions because we did some role play and a skit at different schools … ”

Cannonier thanked the faculty of the schools for their tremendous support and singled out the Cayon High School which had the largest audience.

While that workshop concluded on Friday, the Saturday (February 22) was also busy as the Youth Empowerment staff hosted a one-day workshop dubbed “Empowered Youth Leaders.” Spearheaded by Kristen Hendrickson, the programme was designed to instill a sense of leadership, encourage critical thinking, and tap creative energies to identify and address issues and concerns related to youth.

The Verchilds High School served as the venue for the 35 young people from across St. Kitts. Facilitators including Speaker of the National Assembly Curtis Martin and Education Officer Debbie Isaac challenged the participants to be innovative and congratulated them for their commitment to make a difference.

During the workshop the participants were divided into four groups and each was charged with developing projects to uplift youth in their community. They will be assisted not only by the government staff but a support group from the workshop will also lend assistance. Ms. Hendrickson said that she was satisfied with the outcome.

The Leadership and HIV/AIDS workshops are expected to be hosted again later in the year.