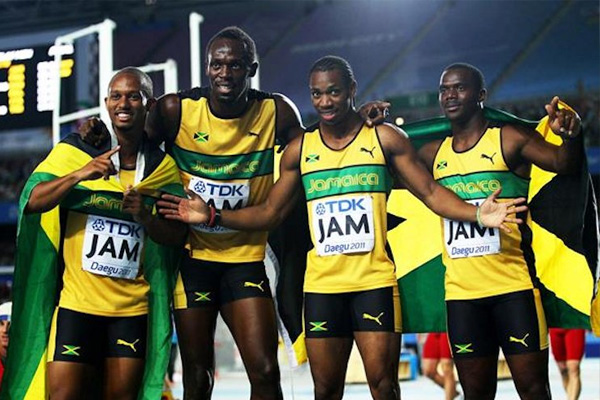 Nassau, Bahamas CMC — Sprint star Yohan Blake led Jamaica’s domination of the men’s 4×200 metres as they shattered a 20-year-old world record and pocketed US$100 000 for their efforts, at the inaugural IAAF World Relays here Saturday night.

The Olympic 200m silver medallist anchored the team of Nickel Ashmeade, Warren Weir and Jermaine Brown, as Jamaica clocked one minute, 18.63 seconds to erase the old mark of 1:18:68 set by the United States in 1994.

The record had appeared safe until Blake took the baton on the final leg and raced through the final 200 metres in an unofficial 19 seconds flat.

St Kitts and Nevis finished second in a time of 1:20.51 while France set a new European record of 1:20.66 in placing third, after the United States were disqualified.

Jamaica experienced no such glamour in the women’s 4x100m relay when they were thwarted by a poor exchange on the final handover and came home second behind winners the United States.

It was nevertheless the men’s 4x200m which took precedence. Ashmeade was pressed on the first leg by St Kitts’ Antoine Adams, but he and Weir, the Olympic bronze medallist, combined to keep Jamaica ahead after the first lap completed in 39 seconds.

Brown and Blake then went to work on the field over the final lap, clocking a swift 39.63 to get Jamaica to the line first.

The massive challenge expected from the Americans failed to materialise as Curtis Mitchell and Ameer Webb fluffed their lines on the second exchange, and completed it outside the zone.

The World Relays wrapped in the Bahamas on Sunday.