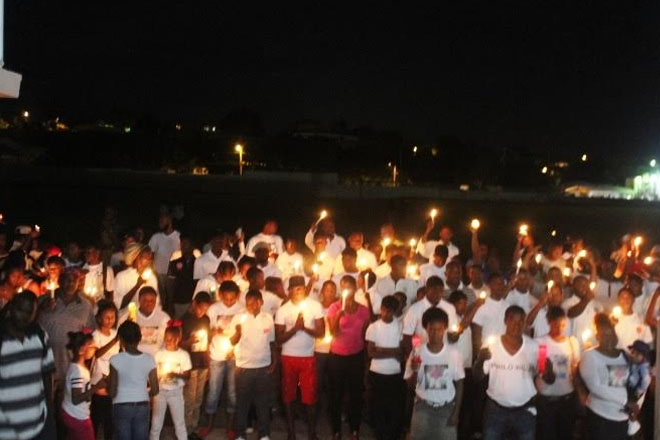 (Sports Page) – The youthful Charlestown Secondary School Cricket team which is presently undergoing training and practice for an upcoming tour to Montserrat took time out on Thursday 22nd October, to pay a sobering tribute to their fallen comrade, Philo Wallace.

Philo Wallace, who was shot to death during the early hours of Saturday 17th October, was previously part of the squad preparing for the trip to Montserrat.

Before engaging in an exciting ten overs match, the cricketers lined both sides of the cricket pitch at the CSS grounds, along with their coaches and supportive teachers from the school.

They were led into a minute of silence in honour of the outstanding allrounder, by Coach Fraser and then several of the cricketers expressed their thoughts about Philo, the cricketer and Philo the human being.

Understandably, it was a sad occasion and some of the cricketers indicated that they were too emotionally overwhelmed to say anything.

Among the young cricketers who spoke was Ross Powell, the exciting Nevisian and Leewards Islands youth opening batsman who stated that ‘Philo was good man and an outstanding cricketer. He will be sorely missed,’ he said.

According to information received, the funeral service for the late Philo Wallace will be held at the Charlestown Methodist church on Wednesday 28th October, starting at 2pm.