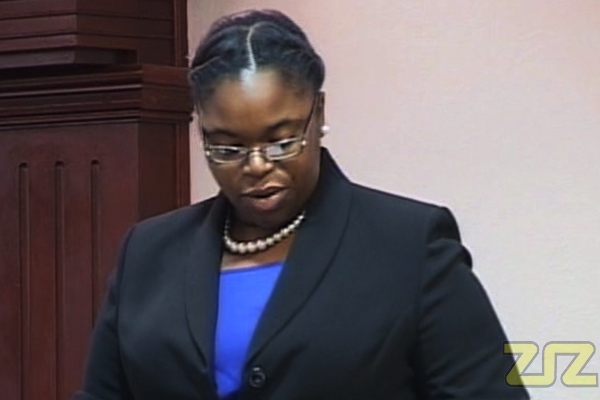 (ZIZ)– The sustainability of the People’s Empowerment Programme, or PEP, was one of the issues up for debate when the St. Kitts National Youth Parliament Association held a mock parliament sitting last week.

Members of the government side of the SKNYPA floor called for the PEP to be restructured. Among the ideas proposed was the establishment of a National Youth Employment Board as a joint effort between the Ministries of Youth and Labour.

Youth Minister, Patrice Harris, said one of the reasons restructuring the programme is necessary is that businesses are not employing PEP participants.

“Establishments are still indicating that they are not in a position to hire persons and we are saddened by the fact. But although we are striving to create a financial environment and decreased unemployment, the burden still rests on the government,” she said.

Harris continued that among the first changes to be made would be the establishment of a training module for PEP participants.

“Mr. Speaker, we are recognizing that persons are just being randomly placed into establishments without proper training and this has resulted in many problems at the workplace. Some participants lack basic etiquette skills and at the end of the day, Mr. Speaker, some of the employers are calling the PEP office saying ‘Please send a next one’. And, Mr. Speaker, with training such as this we believe that we can improve the employability of these participants thus allowing them to be more marketable in the world of work,” she said.

Meanwhile opposition member, Lacrissa Richardson said she and her colleagues oppose the proposition of the board on several points.

One query involved the plan to reduce the number of PEP participants by 40 percent by January 2016.

“And how or by whom, Mr. Speaker do we expect this induced excess of labour to be absorbed. Surely, not the private sector who have already lamented to being financially cash-strapped due to the declining revenues and increased costs of production resulting from increased net effects of increased taxes over the last four to five years,” she said.

Harris responded saying that the aim is to create a spirit of entrepreneurship among the participants and make them self-sufficient.

At the end of the debate Youth Parliament approved the resolution to establish a Youth Employment Management Board.