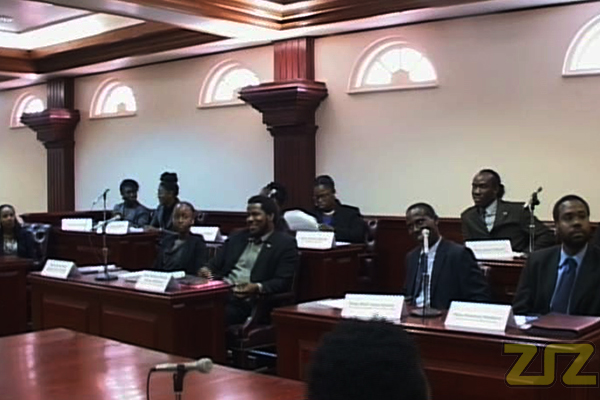 (ZIZ)– The youth of St. Kitts and Nevis have made their voices heard on several heavy issues as the St. Kitts/Nevis Youth Parliament Association (SKNYPA) held a mock Parliament sitting last week.

Among the topics discussed were the establishment of a Marijuana Committee, a National Youth Employment Management Board, and the Motion of No Confidence.

On the issue of the legalization of marijuana, Tameka Vyphuis, Youth Minister of Social and Community Development, noted that current laws infringe upon the rights of certain religious groups such as Rastafarians and Muslims.

Vyphuis noted that establishing a Marijuana Board would lay the groundwork for several benefits for the nation.

She said the first step in such an exercise is to conduct an island-wide drug use survey to map out marijuana users and the areas where the plant’s use is most concentrated.

“This is crucial as it allows government to have a proper insight on how many users we have; who they are…that is their age group, gender, religious backgrounds. It also answers the ‘who’s against it?’ and the ‘why?’ questions. This in turn enables us to produce the right laws that would accommodate everyone,” she said

Meanwhile, opposition member, Ciaran Phillip advocated decriminalization instead of legalization but said hsi side supported the transparent establishment of a Marijuana Board.

“Even though we on the opposition benches disagree with making marijuana legal we do see much value in the establishment of a National Marijuana Commission to invest the time, research, and legal review necessary to objectively inform all of our citizens. We must pursue further dialogue and obtain current data on how our citizens utilize the marijuana plant. It is only by grounding our future actions in this context of unbiased information that we can hope to effectively address the public’s demand for the safe and secure use of marijuana,” he said.

SKNYPA is a non-governmental, non-partisan body of young people who are interested in and dedicated to nation-building.