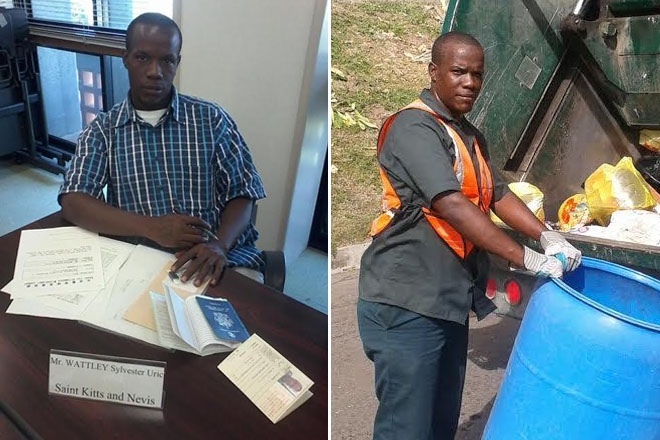 Basseterre, St. Kitts — Mr Wilmon McCall, Operations Supervisor at Solid Waste Management Corporation SWMC (St. Kitts), had gone to visit a sick worker at Prickly Pear Alley way back in 2009, when a young man who spoke English with a heavy American accent asked him for a job as a garbage loader.

“Looking at his youthfulness, I thought he was not serious so I said to him to come to my office the next day at 9 o’clock,” recalls Mr McCall. “And behold the very next day he was in my office at 8:30 in the morning, waiting.

“I interviewed him, I spoke to him and told him as much as I could remember about the job and what to expect. He said that he would take it because he was fed up of his mother paying his rent and buying him lunch from out of the States.”

That was in April 2009, and as they say, the rest is history. Today, 32-year old Mr Sylvester Wattley has not only survived the rigours of a job which is shunned by many, but has come out shinning. Last year in the period October 9th to December 1st, he attended a six-week course on Sustainable Solid Waste Management in Okinawa, Japan.

Early into his stint as a garbage loader, Mr Wattley got into a heated verbal altercation with a lady, and when Mr McCall called him aside to talk to him (as much as it turned out that the lady had indeed instigated the verbal altercation), he thought he was going to be fired.

“I told him that the easy part of the job is to collect the garbage but the hard part of the job is to take the garbage,” commented Mr McCall. “He repeated it several times, until I realised what I had said – I didn’t realise that was a catchword. The fellow began to be very proud of his job because as it was, it was contributing to his financial and social upkeep.”

Mr Sylvester Wattley was born in St. Paul’s and moved to the USA at age seven with his mother who is a nurse, while his father, Mr Augustine Caines, is a prominent baker in Anguilla. He returned to the Federation in February 2008 after having completed his high school education in the USA.

“I was kind of dependent on my mum and dad when I first came back,” remembers Mr Wattley. “One day I called them and told them that I need some money, and my mother told me, okay but not now, next week or so. It made me think that every time I need money I have to wait.

“One day I was in McKnight cooling with some friends and Mr McCall, the Operations Supervisor at Solid Waste happened to be walking down the block to visit one of the elder guys, has passed away now, he used to work for Solid Waste.

“And while he, McCall, was passing there was another young man with us, who knew Mr McCall, and McCall asked, ‘what happened, I thought you needed a job?’ The young man said that he cannot take on that job, so I jumped over and said ‘Mister, what do you do?’ He said ‘I am a manager at Solid Waste, the garbage company’.”

Mr Wattley offered to take the job where he started at the bottom going out on trucks collecting garbage from all corners of the island. Asked how he has survived it he said that he has made it all because of tolerance, as he blamed the way a lot of people in St. Kitts dispose garbage improperly and more so old food. “Sometimes you get smells that burn out your belly.”

“Now I can say training has a bit to do with it, because you cannot go out there and work recklessly,” pointed out Mr Wattley. “For example the heavy bins you have to lift them properly, you have to wear proper clothing, you have to clean up properly, so there is a little training to it, but I do need a lot of tolerance.”

Last year was the crowning moment for him when he was advised that he would be going to Japan for a six-week training course. The course was attended by Solid Waste personnel from the CARICOM countries and, as he found out, he was the lowest in terms of rank among those who attended the training course in Japan.

“It did not intimidate me because they were so enthused they wanted to know how I got there,” explained Mr Wattley. “So I spent most of my time wanting to know how I am going impress these people, how do I hype with these people like they want to know, you must be doing something good because your job sent you. It kind of dawned after a while I realised, I am actually noticed.”

General Manager of the Solid Waste Management Corporation SWMC (St. Kitts), Mr Alphonso Bridgewater, spoke to the negotiation and engineering that facilitated Mr Wattley’s attendance, participation and the eventual successful outcome of which was fraught with challenges of one sort or the other. He however attributed the reason to Wattley’s job attitude. He is computer literate and that was a major requirement.

According to Mr Bridgewater, the Japanese have an international relationship with St. Kitts and Nevis, where they cooperate through the JICA (Japanese International Cooperation Agency). Prior to Mr Wattley going to Japan, Mr Wilmon McCall and the then manager of the Nevis Solid Waste Management Corporation had benefitted from a similar training.

“He has come back and you could see he has maintained a very positive attitude, so we are looking at a possibility of giving him a promotion so to speak,” explained Mr Bridgewater. “The challenge we have, we do not want to move him right away without the rest of them benefitting from seeing him in operation and benefitting from the obvious enthusiasm he has.”

The organisation has the interest to have Mr Wattley empowered because he has the capacity. The training has placed him in a unique position where working in a cross-fertilised environment he wouldn’t be working just as a loader, as he now has the combination of a loader, enforcement, and landfill type operations, and has credentials to work on a rapid response team.