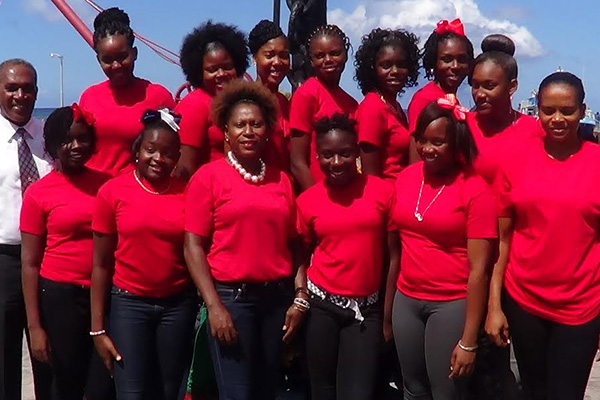 Youthful Nevis Netballers off to Antigua

Some parents and well wishers were among persons present at the Charlestown pier on Friday 4th April to see off the under 16 Nevis Netball team which was leaving the Federation en route to Antigua.

Also on hand to deliver words of motivation and wisdom to the young Netballers, were the Premier of Nevis the Hon Vance Amory and Permanent Secretary in the Ministry of Sports, Mr. Keith Glasgow.

Premier Amory noted that his Administration had invested in the Netballers because they wanted them to gain experience in such tournaments and harness their skills so that one day they can be at the top of their game.

Mr. Glasgow for his part challenged the team to conduct themselves in a manner representative of ambassadors for the country and to play to their full potential.

One of the chaperons/coaches accompanying the team, Vera Herbert explained that the team will be participating in the Caribbean wide Jean Pierre under 16 tournament and will be placed in the development category which she expected the local girls to win.  Also accompanying the team, were local Netball officials, Tricia Williams and Govanie Manners –Hendrickson.

The young Netballers all seemed enthused and promised to make the island proud with their overall returns.