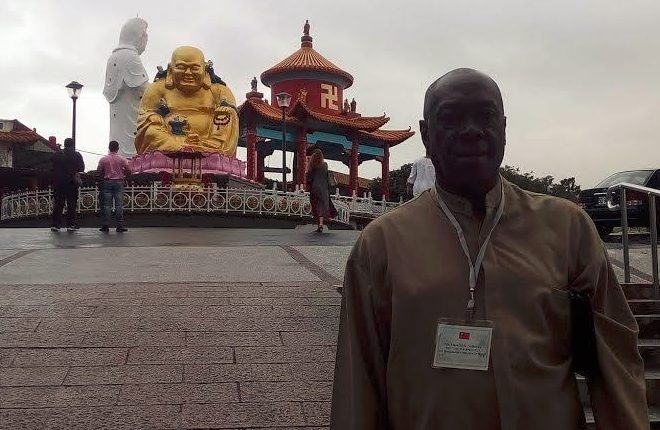 (ZIZ NEWS)— General Manager (ag) of ZIZ Broadcasting Corporation Viere Galloway says the Republic of China, Taiwan, is a place he will always cherish because of the atmosphere which brings a sense of home away from home. This was his third visit on the invitation of the local embassy.

Mr. Galloway was part of a Media Group of Taiwan’s English-speaking allied countries, with the aim of knowing better about Taiwan’s interior and foreign policies, social and economic situation and soft powers like culture, tourism, renewable energy along with Information and communication technology.

“My six day stay hosted by the Ministry of Foreign Affairs (MOFA) of the ROC was very enriching as I was able to meet up with my fellow St. Kitts and Nevis students who are making their life better by pursuing higher education in various fields,” he noted.

Mr. Galloway said “The visit was affected somewhat on the second day of our arrival by the passing of a typhoon which impacted on our schedule for two days. However we were able to full fill a number of engagements at various historical sites and other places of interest.”

“The media group was able to visit the Medical University and the International University of Science and Technology where we were taken on a tour of the facilities there and each journalist was given an opportunity to have private discussions with the students from St. Kitts and Nevis and other countries which are part of the scholarship arrangement with the Republic of China, Taiwan. The students were also given a chance to address the visiting media operatives who fielded questions on various aspects of life on campus and Taiwan in general,” he further revealed.

The ZBC Manager said it was very interactive as students spoke of how they were able to adjust to the new way of life in Taiwan and some of the challenges they face. It was clear that they were up to the task of focussing on the job at hand and that is to graduate at the top of the class despite the language barrier and other obstacles that may come their way.

“I would just like to congratulate the ROC on the 105th celebration of their double ten anniversary and hoping that the relationship between St.Kitts and Nevis and the Republic of China, Taiwan could go from strength to strength,” he said.

The ROC has played a key role in the development of St. Kitts and Nevis by providing training opportunities in a wide variety of areas and scholarships provided by the Ministry of Foreign Affairs and the International Cooperation and Development Fund (ICDF).