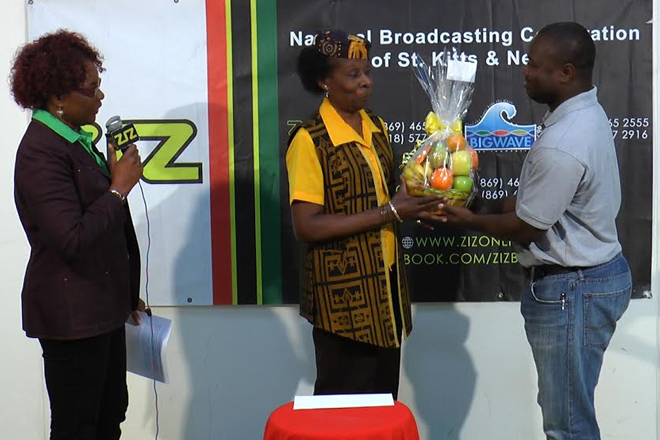 (ZIZ News) — Myrna Braithwaite of Sandy Point has been awarded as the winner of the ZIZ Broadcast Corporation Prayer Contest.

A few weeks ago ZIZ launched a competition asking persons to submit a prayer to start off each day’s programming.

Braithwaite’s prayer was chosen, and this past week ZIZ’s Manager of Broadcast Services, Cherryl Ward and Supervisor of Programming Marlon Bristol presented her with her prize.

Braithwaite explained the inspiration behind the prayer.

“After I heard this announcement on the radio I said somehow that we need in this Federation need some kind of prayer. And I’d been thinking about it…and the crime that we have in this place and I said I have to do this prayer because we need each other in this world and we have to live good with each other, no matter what,” she said.

The Morning Prayer is aired at 4:29 each morning is one of the new additions to ZIZ’s line-up since the launch of 24 hour programming on the 1st of February.