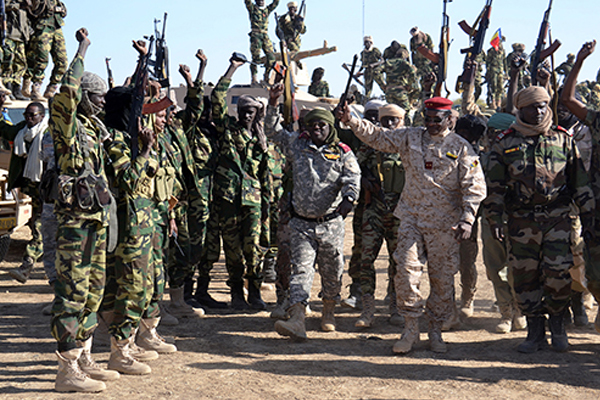 Niamey, Niger (AFP) — Boko Haram launched its first major attack in Niger on Friday, triggering a forceful response from regional troops who claimed to have killed more than a hundred of the Islamists.

The clashes in Bosso and Diffa, along the border with Nigeria, marked yet another expansion of violence attributed to Boko Haram, but it seemed to have come at a heavy cost.

Niger’s defence minister reported that 109 of the Islamists were killed, along with four soldiers and a civilian. Seventeen other troops were wounded.

Chadian forces, who have taken a lead role in battling Boko Haram in recent days, fought alongside Niger’s troops on Friday. Chad’s commander in Niger, General Yaya Daoud, was also wounded with a gunshot to the stomach, a security source said.

The clashes in Niger came as regional efforts intensified to battle Boko Haram, which has waged a six-year insurgency centred in northeastern Nigeria, where the Islamists have seized swathes of territory.

The conflict has killed at least 13,000 people and forced more than a million from their homes since 2009.

Niger announced Thursday that on Monday it would ask its parliament to approve sending troops to Nigeria to fight the militants alongside Chadian and Cameroon soldiers.

“This unchecked killing must stop,” State Department spokeswoman Marie Harf said. “We continue to provide support to governments in the region, including through intelligence sharing and are increasing our support for these efforts.”

US intelligence officials said Friday that while Boko Haram is flush with cash and weapons after a string of battlefield advances, the militants could face a tougher fight with Nigeria’s neighbours.

The military intervention of neighbouring powers could potentially be a “game changer in a positive way,” one intelligence official said.

Local radio reports said Friday’s fighting in Bosso broke out in the morning and resulted in heavy clashes.

“We could hear the sound of weapons all around the town, often very near our windows. There was the noise of heavy weapons and of light arms, making our houses shake,” one resident told AFP.

Chadian forces have been stationed in Bosso since Monday, a humanitarian worker said, adding that Boko Haram “took the municipality” for a time before being “driven back to Nigeria”.

However, a local leader said only that Niger’s troops fought back the raid, while the Chadians were stationed at a distance.

A resident who spoke on condition of anonymity said soldiers from Chad and Niger “were all over the streets” of Bosso.

“It was like a race across the town,” one resident said. “As the fighting drew near, we heard cries of ‘Allahu Akbar’ (God is greatest). We heard an aircraft fly over the town.

“We even saw smoke coming up from the town hall and the prefect’s office, where heavy gunfire was heard,” he added in the Hausa language, asking not to be named. “It’s quiet now, but we’re staying home.”

Other clashes broke out some 10 kilometres (six miles) from Niger’s Diffa, which is on the border with Nigeria near a bridge that links the two countries. Its control is essential for transporting troops and supplies.

Little more than a stream, the Komadougou Yobe marks the frontier between Niger and Nigeria, and the water level has recently dropped considerably, making it easy to cross.

A large number of refugees fleeing the violence in Nigeria have also crossed into Diffa.

Yacouba Soumana Gaoh, Diffa’s governor, told local reporters that close to 3,000 of Niger’s troops are massed in groups every 10-15 kilometres (six to nine miles) along the border with Nigeria.

Nigeria’s military has drawn fierce criticism for failing to rein in the insurgents, who have intensified attacks ahead of presidential and parliamentary elections set for February 14.

Nigerian election authorities said they will announce on Saturday whether the polls will be delayed as problems mount with distributing identity cards to 68.8 million registered voters.