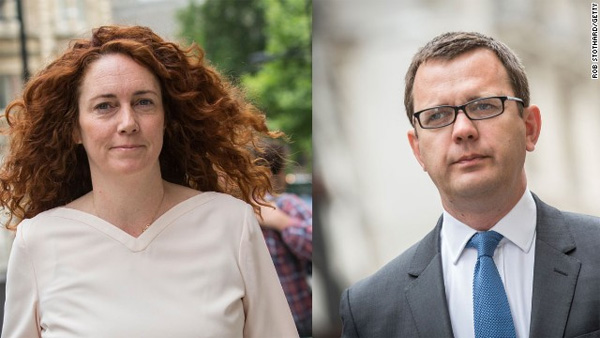 But another of Rupert Murdoch’s former newspaper chiefs, Rebekah Brooks, was unanimously cleared of all charges at the Old Bailey court in London after an eight-month trial, her lawyer said.

Brooks was overcome by emotion in the courtroom as the verdicts were read out, the UK’s Press Association news agency said. She left the Old Bailey accompanied by her husband, Charlie Brooks, but did not stop to speak to the waiting media.

The jury is still considering additional charges against Coulson and former News of the World royal editor Clive Goodman of conspiring to commit misconduct in a public office, the Press Association said.

Tuesday’s verdicts came three years after it was revealed that journalists on News of the World hacked the phone of then-missing teenager Milly Dowler in 2002, raising hopes that she was alive and checking messages, when in fact she had been murdered.

The resulting public and political outrage led to the closure of the 168-year-old paper and the setting up of a public inquiry to examine journalistic ethics.

At the time the schoolgirl’s voice mail was intercepted, Brooks was editor of Britain’s top-selling News of the World, and Coulson was her deputy. After Coulson succeeded her as editor, Brooks edited The Sun newspaper, and she later became chief executive of the parent company, News International.

Coulson resigned as News of the World editor in 2007 after its then-royal editor, Goodman, and a private investigator, Glenn Mulcaire, were jailed for hacking into voice-mail messages left for royal aides.

Coulson denied any wrongdoing and later became Cameron’s director of communications. The former editor resigned from his Downing Street position in 2011 as coverage of the phone hacking scandal broadened.

Cameron, who has faced criticism for hiring Coulson, gave what he called a “full and frank apology” Tuesday in a statement to the media, saying he took “full responsibility” for his former aide’s recruitment.

The Prime Minister said he had decided to give the former editor “a second chance” on the basis of promises Coulson had given that he did not know about phone hacking.

“I am extremely sorry that I employed him, it was the wrong decision, and I am very clear about that,” Cameron said.

He added that there had been no complaints about the work Coulson did for him either at Downing Street or beforehand when Cameron was leader of the opposition.

Coulson’s guilty verdict on the charge of conspiring to hack phones “raises important questions about David Cameron’s judgment in employing him,” said Matthew Ashton, an expert in politics and the media at Nottingham Trent University.

“In particular what warnings did he receive beforehand, and how rigorous was the vetting and interview process?

“Regardless of the verdicts, this trial has raised important questions about the relationship between the political, economic and media elites in the UK.”

Brooks resigned as News International CEO in July 2011 amid public anger over hacking allegations, and police arrested her the following week.

Brooks and Coulson were charged in 2012, together with five other journalists, with conspiracy to intercept the voice mails of high-profile figures in Britain. All seven denied wrongdoing.

Brooks also faced, along with her husband and her former personal assistant, Cheryl Carter, two charges of conspiracy to pervert the course of justice. All three were cleared of those charges, the Press Association reported.

Retired managing editor Stuart Kuttner, who was cleared of conspiracy to hack phones, thanked his legal team in a statement outside court.

“The diligence, the dedication and perhaps, above all, the passion of my lawyers over the past three years has been extraordinary, most remarkable — and it is to them that I owe a huge and enduring thanks for the result, the unanimous verdict of the jury today.”

News UK, the UK newspaper publishing arm of Murdoch’s News Corp., said in a statement: “We said long ago, and repeat today, that wrongdoing occurred, and we apologized for it. We have been paying compensation to those affected and have cooperated with investigations.”

The publisher said it was making changes to ensure this kind of wrongdoing did not recur and that it supported a new UK press watchdog expected to start work later this year.

“Out of respect for the fact that further legal proceedings will occur, we will have no further comment at this time,” the statement added.

During the trial, the jury heard how a private detective working for the tabloid allegedly made more than 6,000 hacking calls in a two-year period. The Metropolitan Police estimate there were more than 1,000 victims, including royalty, politicians and celebrities. The phone of Kate Middleton, now the Duchess of Cambridge and wife of Prince William,was hacked 155 times, it was revealed at the trial.

In November, prosecutors alleged that Coulson had a clandestine affair with Brooks from 1998-2004, which they argued showed the pair’s level of trust.

Referring to a letter she had written to Coulson and that was produced in court, Brooks said: “Andy and I were incredibly close at the time. He was my best friend. I think that comes across.” She denied there had been a long-standing affair but acknowledged there had been periods of physical intimacy.

The BBC and Guardian newspaper reported that when Coulson testified in April — with his wife watching from the public gallery — he said the affair “shouldn’t have happened.”

But he denied that it meant he and Brooks had shared sensitive stories, the outlets said.

In her defense, Brooks denied in court that she had ever approved phone hacking while she was News of the World editor. Asked about the practice, Brooks said: “No desk editor, no journalist ever came to me and said, ‘We’re working on such and such story, and we need to access their voice mails.’ ”

She told the court she would have felt it was “a serious breach of somebody’s privacy, especially if you did not have an overwhelming public interest,” and of the newspaper industry’s code of conduct.