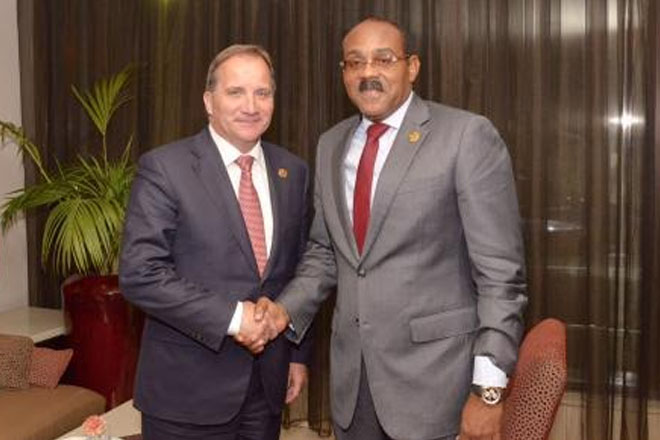 Antigua-Barbuda continues to forge closer ties with other nations

St John’s, Antigua — Prime minister of Antigua and Barbuda Gaston Browne continues to foster closer relations with international leaders and countries as his government works towards tackling issues that affect Antigua and Barbuda and other developing nations.

During a recent visit to the Horn of Africa, Browne met with leaders and foreign representatives of Mauritius, Seychelles, Swaziland, Cameroon and Tuvalu and pushed for foster closer relations given similarities being either small states, developing countries and interaction within the Commonwealth.

Browne also used the opportunity to introduce the candidacy of Ambassador Sir Ronald Sanders to the post of secretary general of the Commonwealth. Sanders’ candidacy was well received by the respective delegations.

The heads of delegations of Seychelles, Mauritius and Tuvalu commended Browne on his position regarding the recent European Union tax haven black list. The countries pledged support for each other on this matter and made a commitment to work together going forward.

The delegation of Seychelles inquired of the possibility of sending a team from its ministry of finance to observe and learn from Antigua and Barbuda about the online gaming industry.

During his stay in Africa, Browne also held bilateral discussions with the head of delegation of Mexico and the prime minister of Sweden.

Browne and Prime Minister Stefan Löfven of Sweden also had fruitful discussions on cooperation and mutual interest. Löfven was particularly concerned with the EU’s blacklisting of Antigua and Barbuda and made a commitment to look deeper into the matter. Both prime ministers explored developmental assistance for Antigua and Barbuda. One area identified was assessing the drought situation and how Sweden can assist in this most urgent matter.

The country’s leader also had numerous interviews with local television in Addis Ababa, UNTV and South South News. He was singled out for his numerous strong statements on international financial reform and his commitment to addressing issues affecting small island developing states.