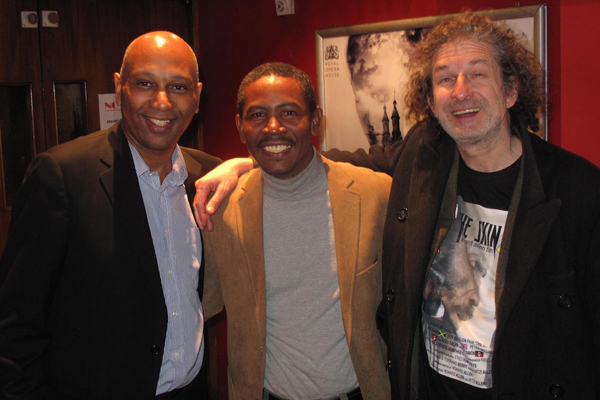 London, England — The reviews from the London premiere of the Antiguan homegrown movie The Skin are coming in and they are good.

The movie made history recently as the first feature film from Antigua and Barbuda to be screened in the United Kingdom. Through their first distribution deal with Sankofa Televisual, The Skin by HAMAFilms Antigua premiered at the Gate Cinema on Thursday, December 18, 2014.

“I was so pleased that the film’s director, Howard Allen, was able to make it to London for the screening, and he was able to meet up again with actor Jeff Stewart and that the audience could also enjoy the Q&A with the producer and cast live by video link to Antigua. Now that we have taken this first step in establishing Caribbean films as a legitimate genre in their own right. We plan to continue showcasing the breadth of talent from the Caribbean and the Diaspora,” said Ron Belgrave, head of Sankofa Televisual.

The audience was a mix of Caribbean nationals and some Antiguan friends and family who came to support the producer.

Denise Bingham who was in the audience said, “To be honest the quality of acting and story and content was so much better than the British stuff shown. It was a proper film and everyone there really loved it. The directors chat was quite cool. Your co-star was ace! The clips of the island were lovely.”

Tom Pritchard of the UK, who was an intern on the production, ended up getting a small part in the film. He commented on Facebook that it was a “Great movie. Caribbean film at its very best. I feel very proud to have been part of it. Even my Liverpool FC tattoo makes its debut.”

Actor Jeff Stewart, who plays a quirky sailor and antique dealer in the film and resides in London, was able to be at the premiere of the film and participate in the Q&A after the screening. Joining the chat live via the internet were Aisha Ralph and Brent Simon and producer Mitzi Allen.

The HAMA team admits that they can no way take credit for the extent to which this film and previous ones continue to gain exposure. Howard was able to travel to the UK screening through the sponsorship by the ministry of culture.

“The government of Antigua and Barbuda has been a staunch supporter of our work since the first film and that has allowed us to promote the film to audiences which may have not been on our radar,” said Howard. “I’m pleased that the audience enjoyed the film and I’m looking forward to seeing how far the film will go with Sankofa Televisual. This step takes us closer to the South African market.”

Building a relationship with Sankofa Televisual is a new step for the movie making couple. They have given the company the rights to distribute the movie in the UK, Europe, Asia, Middle East, Australasia and Africa.

Other films by HAMAFilms are The Sweetest Mango, No Seed and Diablesse.