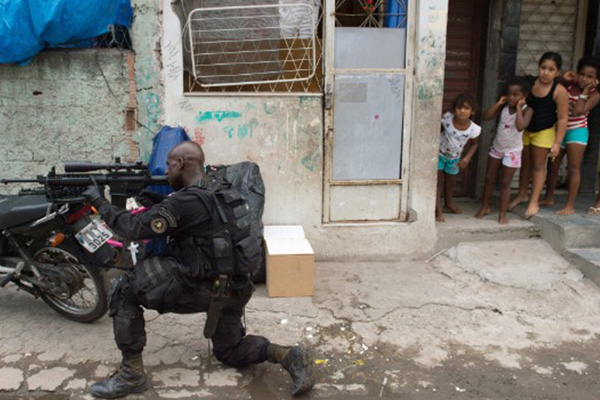 Residents walk by, barely looking at the troops sent in to occupy the Complexo da Mare as an emergency response to escalating violence in the city’s notorious favelas.

Some 2,500 army troops and marines have moved in to reinforce police in an operation aimed at securing the slum, home to 130,000 people, ahead of the World Cup, which runs from June 12 to July 13.

Seizing control from drug gangs was deemed a priority because the shantytown lies just a few kilometers from Rio’s international airport.

“It’s not a peaceful operation because we have three different criminal gangs here and they are rivals,” Gen. Roberto Escoto told CNN.

The Rio state government requested the army occupation after a series of attacks against police posts. The troops will remain until at least July 31, after the World Cup ends, Escoto said.

“It’s an emergency,” Escoto said. “The state police so far don’t have enough policeman and enough equipment to operate in all the city.”

It’s also the latest campaign in Rio’s so-called “pacification” program launched in 2008. Officials say that after neglecting security in the city’s poorest neighborhoods for decades, police have now seized control from drug gangs in dozens of slums.

While soldiers have provided support during the initial campaign, they have been replaced by police posts in most operations.

But for the Complexo da Mare, officials decided more drastic measures were needed.

Unlike many of the favelas that cling to the hills near Rio’s picturesque beaches, the Complexo da Mare is a sprawling, mostly flat shantytown that combines 15 different neighborhoods in the city’s smoggy north zone.

Cement-block houses are covered with colorful graffiti and loops of tangled wire hang overhead, evidence of the do-it-yourself electricity that powers most homes.

Schoolchildren play soccer on a synthetic-turf court while residents sit at plastic tables set up in the street, drinking beer and listening to music blast over speakers, seemingly oblivious to the heavily armed soldiers who march by.

When asked, they refuse to talk about the military occupation.

Troops have set up checkpoints at the entrances to the favela and patrol the streets on foot and in armored personnel carriers. Soldiers with metal detectors and trained dogs search for hidden caches of arms or drugs.

So far, they have registered more than a half dozen gun battles.

The resurgence in violence in some of the favelas already pacified has raised alarms in a city that will host many of the 600,000 international fans attending the World Cup. Rio also will host the Olympic Games in 2016.

Tourists strolling along Copacabana Beach at the other end of the city said they were taking precautions, but not overly worried.

Peter, a Belgian businessman in town for a conference, said he was given a brochure with a list of security suggestions when he arrived. “I feel safe here, but I know where not to go,” he said.

Simon, a Danish exchange student, agreed that a little knowledge goes a long way. “Use common sense, grab a cab in the evening,” he said. “Don’t use public transportation at night.”

In the Complexo da Mare, Escoto said the military will have everything under control.

“I can assure you that Brazil has conducted a very well-planned operation to secure the 12 cities,” he said.

“Rio de Janeiro will be prepared for the World Cup,” he added, before his aides whisked him off, part of their policy never to let their top commander stay in one place for long in hostile territory.