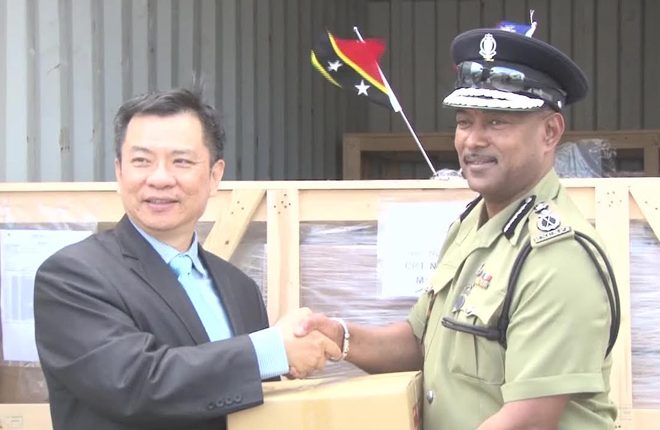 Car parts donated to police by Republic of China Taiwan

(ZIZ NEWS) — The Republic of China Taiwan has once again contributed to safety and security in the federation with the donation of spare parts for vehicles owned by the Royal St. Christopher and Nevis Police Force.

In accepting the donation, Commissioner of Police Ian Queeley spoke of how the donation came about.

He further thanked the Republic of China Taiwan for its continued support.

“I’m delighted this afternoon to be in this position to once again say thanks to the government and people of the Republic of China Taiwan. Sometime around 2013, there was a need for increased mobility within the police department and the ambassador was approached in terms of providing some vehicles. We were challenged as the vehicles worked and were in need of replacement parts so once again we approached our friends at the embassy who kindly consented,” he said.

Resident Ambassador of the Republic of China Taiwan, His Excellency George Gow Wei Chiou said he was pleased to be able to assist as the country’s safety and security is very important.

“The purpose of these car parts is to try to maintain the maximum availability of police cars which were donated by the Taiwan government 4 years ago and we hope that these vehicles can keep a very good availability so the Royal St. Kitts and Nevis police can use these vehicles efficiently.”

The handing over ceremony held at Hobson Enterprises was chaired by Permanent Secretary in the Ministry of National Security Osmond Petty. It was also attended by members of the Police High Command, Force Finance Officer Icilma Carol Phipps Gilbert and representatives of Hobson Enterprises.

The cost as revealed by Mr. Petty, is in excess of 60 thousand US dollars.