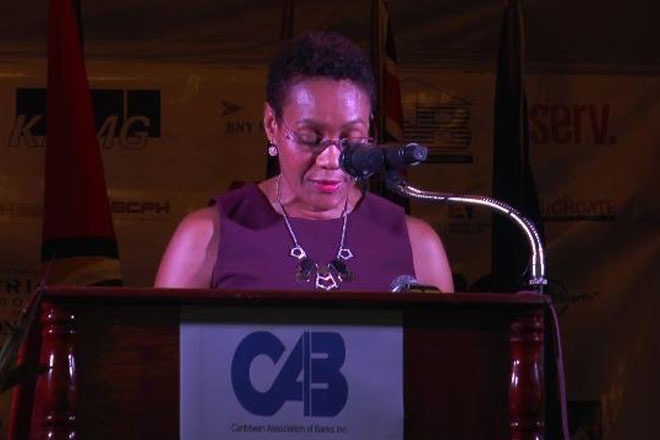 (ZIZ News) – Banking officials and related service providers are in St. Kitts this week for the Caribbean Association of Banks Conference, taking a look at the future of the industry and issues to be addressed.

The event began with an opening ceremony and cocktail at Government House on Wednesday night.

Chairperson of the Caribbean Association of Bankers, Joanna Charles said one of the major issues being faced is losing corresponding banking relationships with U.S. banks.

“This is an issue facing all sectors. As financial intermediaries, banks are highly dependent on correspondent banking relationships to facilitate critical economic and financial transactions such as remittances, foreign direct investments and international trade in goods and services,” Charles said.

Delivering the feature address, President of the St. Kitts-Nevis Bar Association, Charles Wilkin QC called for an end to the political tribalism that, he says, has stunted economic growth in the region.

“Sustainable economic development should not be tied to a five year cycle. This has nevertheless been the norm of large measure because of the divisiveness of our politics and the extent of which it is personality rather than issue based. Nowhere is that worse than here in St. Kitts and Nevis, I hate to confess,” he said.

Prime Minister, the Hon. Dr. Timothy Harris said the conference theme “The Financial Services Industry at Cross-roads: Where to from Here” is appropriate as it comes shortly after Caribbean countries were asked to sign on to the U.S. Foreign Account Tax Compliant Act.

He said, “It is now time for introspection and for critical self-examination, evaluation, and forward planning. It is important, therefore that the necessary resources and attention be allocated to ensure that proper and up-to-date systems are introduced in our organisations that could facilitate compliance with domestic regulatory requirements as well as global standards.”

The annual conference is viewed as the premier event of its kind in the region and attracts delegates who, through their discussions, will seek solutions and develop strategies that will guide the future of the financial sector.