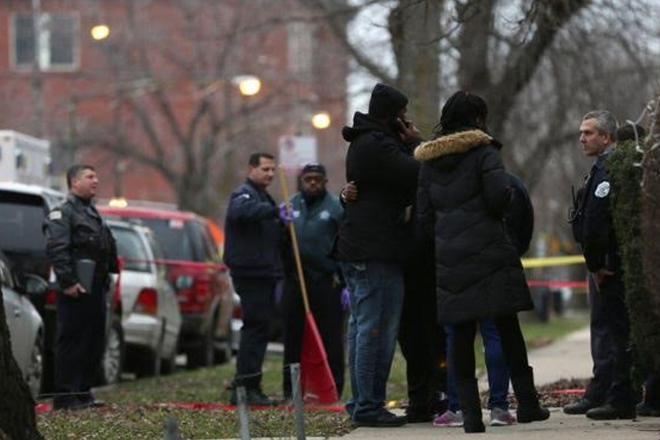 (BBC) A Chicago police officer “accidentally struck and tragically killed” a mother of five after responding to a domestic disturbance, department officials say.

Bettie Jones, 55, was killed along with her neighbour, 19-year-old Quintonio LeGrier, who was the reason for the police call-out early on Saturday.

Chicago Mayor Rahm Emanuel said an investigation had been launched.

The city’s police department is already the subject of a federal investigation over its use of force.

It follows the killing of a black teenager by a white officer in 2014.

Saturday’s double shooting happened in the early hours. Antonio LeGrier told theChicago Sun-Times that he had returned home to find his son, who had mental health issues, in an agitated state.

He said he called the police, and warned his neighbour Bettie Jones, who lived on the floor below, about what was going on.

When the police arrived, he said, he heard gunshots and found his son and Ms Jones lying in the foyer.

Chicago Police Department said in a statement that “upon arrival, officers were confronted by a combative subject resulting in the discharging of the officer’s weapon, fatally wounding two individuals.

“The 55-year-old female victim was accidentally struck and tragically killed. The department extends its deepest condolences to the victim’s family and friends.”

Mayor Emanuel, in a statement, said: “Anytime an officer uses force the public deserves answers, and regardless of the circumstances, we all grieve anytime there is a loss of life in our city.”

US Attorney General Loretta Lynch announced earlier this month that a federal investigation into the Chicago Police Department would focus on whether there was a racial dimension to its use of force and its accountability procedures for officers involved in the use of force.

According to the Better Government Association, Chicago police shot 240 people in the 2010-2014 period, or about one per week. Seventy of those people died and of those, two-thirds were African American.

Ms Lynch’s announcement came after weeks of protest which followed the release of video footage, showing the moment a police officer opened fire on 17-year-old Laquan McDonald, shooting him 16 times, in 2014.

The officer, Jason Van Dyke, was charged with first-degree murder just a few hours before the video was released in late November – more than a year after the shooting.

In response to the outcry, Mayor Emanuel fired the city’s police chief and later announced the resignation of the Independent Police Review Authority’s chief.

Mr Emanuel originally said a federal investigation would be “misguided”, but later back-tracked and welcomed an investigation.