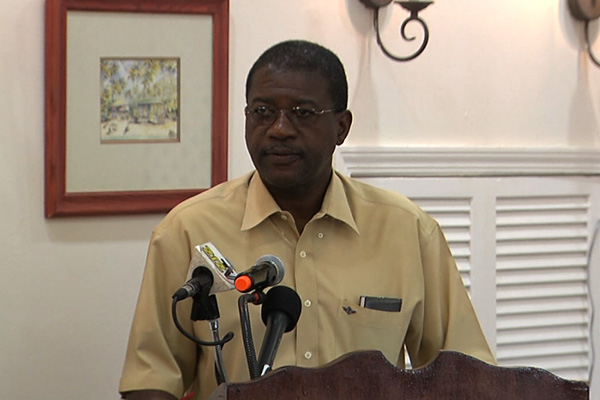 Chief Medical Officer details BHS issue, concludes that from an environmental health standpoint, the entire school is fit for use by humans

Basseterre, St. Kitts (CUOPM) — The Ministry of Health has not received a report from a medical doctor certifying a personal medical or population health problem at the Basseterre High School as of Friday 1st March, Chief Medical Officer, Dr. Patrick Martin said Monday.

Dr. Martin noted that in February 2012 and January 2013, as a result of reports from the Environmental Health Department and CAIRI respectively, the Ministry of Health became aware of an environmental health problem at the BHS.

“Corrective measures have been taken by the Ministry of Education and the Ministry of Public Works,” said Dr. Martin, who stated that in 2011 to 2012, staff and students reported certain symptoms – itchy eyes, rashes, etc. Scientific analyses attributed the same to excessive levels of mould and dust in certain indoor spaces of the BHS,” said the Chief Medical Officer.

Pointing to the problem, he noted that mould and dust are everywhere in nature.

“Ordinarily, persons who have normal immune systems are not affected. Persons whose immune systems are weakened (by prolonged steroid use, HIV, cancer and metabolic diseases) are at higher risk for becoming affected,” said Dr. Martin, who further stated that additionally, persons who have allergies may have mild, moderate or severe irritant-related reactions upon contact with excessive levels of mould spores and dust.

He noted that St. Kitts and Nevis is a tropical country and as such, the air is always warm and humid.

“Mould colonies always accumulate in indoor spaces that are damp, dark and warm. Mould can be seen on shower curtains, the grout of bathroom tiles and on food left in the open for days to weeks. Mould can also be found in air-condition systems and on furry objects such as teddy bears, carpets and fabric-covered furniture. Dust accumulates in indoor spaces and on objects that are not regularly cleaned,” he said.

Detailing the response to the problem, the Chief Medical Officer disclosed that in February 2012, the Environmental Health Department responded to a call from the BHS principal to survey the labs and problems were observed with certain chemicals and further analysis was recommended.

“In March 2012, Dr. Milton Whittaker, St. Kitts Biomedical, carried out a survey and made certain recommendations. He also commented on the sewer system.
In November 2012, having being contracted by the Ministry of Education (MOE), CAIRI investigated the BHS indoor quality. On January 3, 2013, CAIRI draft report was received. It corroborated that initial finding that physical symptoms experienced by staff and student were attributable to environmental health problems with the indoor spaces investigated,” disclosed Dr. Martin.

The Chief Medical Officer also noted that on January 9, 2013 a meeting of a panel established by the MOE to review the CAIRI Report (CR) was convened.

From January 10 to 12, 2013, the panel discussed its findings and recommendations during separate meetings with the Minister of Education, the BHS Staff (at the Old Boys School) and the BHS PTA (at the Washington Archibald High School, said Dr. Martin.

“No radionuclear threat and no chemical threat were identified in the CR. The reported symptoms were consistent with exposure to the accumulation of dust and mould. The BHS Western Campus is over 60 years old. Deficient maintenance is the overriding issue. Damp, mouldy and dusty indoor spaces were due to lack of maintenance which caused the following:

(a)     Peeling concrete plaster resulting from water seepage into cracks and subsequent corrosion and expansion of the steel reinforcement in some areas.

(b) Labs in advanced state of disrepair with accumulation of dust and mould and (c) symptoms experienced by staff and students were also due to the accumulation of sewer gases from defective sewer systems.

Dr. Martin further noted that prior to the resumption of classes on the Western Campus.

a. The cleaning of all areas affected by excessive dust and mould.

b. The redesign and reconstruction of sewer systems and restrooms.

c. The repair of structural defects in the roof, walls, and pillars.

The Environmental Health Department should survey conditions of the Eastern Campus and report on its suitability for immediate use.

“In general, the Panel recommended that the MOE make adequate and immediate provisions for effective preventive maintenance, safety of lab chemicals, and security of physical assets, at the BHS and at all schools,” said Dr. Martin.

The Chief Medical Officer also disclosed that during the January 10-12, 2013 period there were meetings with the Minister, Staff, and PTA and Dr. Whittaker offered his institution’s assistance in strengthening lab management.

During the same meetings, Dr. Martin reported as follows that a review of Joseph N. France Emergency Room records between January and December 2012, found no hospitalizations of staff or students of the BHS as a result of exposure to dust and mould, contrary to public statements.

That the Ministry of Health had not received any report from a medical doctor pertaining to symptoms experienced by staff and students.

That pursuant to the reporting provisions of the Public Health Act, a medical doctor is obligated to report matters of public health concern or emergency to the Ministry of Health in the manner established for that purpose.

That the Ministry of Health is ready to receive medical certificates and, as is customary, inform the public of any threat to the public’s health.

On January 15, 2013, Chairman Williams visited the Eastern Campus of the BHS and reported to the Ministry of Education as follows: (a) Corrective works with the sewer were progressing; (b) after a general tour with school management, all agreed that that section of the school was ready for use and (c) although the other panel members were unavailable for the tour, Whittaker and Martin reported their satisfaction with works having visited earlier.

On February 6, 2014, Minister of Education Sen. the Hon. Nigel Carty organised a tour of both campuses. In attendance were Deputy Prime Minister Hon. Dr. Earl Asim Martin (accompanied by a senior Public Works technician, and Minister of Health, Hon. Marcella Liburd, accompanied by the CMO, BHS Principal and Deputy Principal, GIS, and senior official of the Ministry of Education.

At the Western Campus

Refurbished Biology Lab: The tour started there with remarks from Minister Carty and the Principal. No problems with dust, bacteria and mould were identified or seen.

b. Refurbished Physics Lab: No problems with dust and mould were identified or seen.

c. Refurbished Chemistry Lab: No problems with dust and mould were identified or seen.

d. Refurbished Male Bathroom: No problems with sewer gases were identified or smelt.

e. Refurbished Sewer (outside staffroom): No problems with sewer gases were identified or smelt.

g. Refurbished Sewer: No problems with sewer gases were identified or smelt.

The Chief Medical Officer concluded and recommended corrective works at the BHS were satisfactorily done (except for outstanding structural repairs in the labs of the Eastern Campus).

“From an environmental health standpoint, the entire school is fit for use by humans. The Ministry of Health stands ready to respond to any additional questions/concerns,” the CMO said.