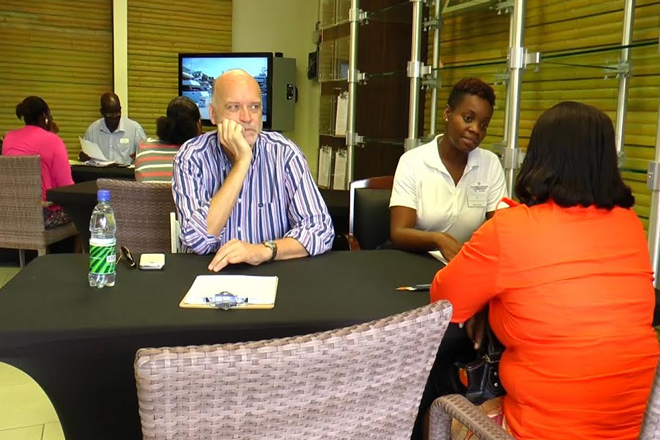 In speaking with ZIZ, Executive Vice-President of Operations at Christophe Harbour, William Anderson said the company intends to make the career fair a bi-annual event to recruit more staff.

“I think it will actually be bi-annually. We’re getting to the end of the season and we’ll definitely do it again at the beginning of the season. It really helps us to have a great pool of people because Christophe Harbour is growing so much with our new marina; we’re going to be doing golf. There are so many things happening that we really have to begin attracting a large group of staff”, he said.

When asked what inspired Christophe Harbour to host this event, Anderson said the company realized it was quite difficult for persons to come to find them due to their distant location.

“Sometimes we have difficulty getting folks out to the property so we thought instead of bringing them to Christophe Harbour we’ll bring Christophe Harbour to town. Hopefully we’ll have a great pool and the response today has been unbelievable. We are thrilled with how many people have come out”, Anderson added.

Mershelcer Kelly, an applicant who was anxiously waiting in line said she was pleased with the idea of a Career Fair as it gives the public a chance to interact with the management face to face.

“I’m very glad for this opportunity because it gives us a better chance to prove ourselves instead of them basing the decisions off of a resume. So I’m glad that Christophe Harbour came up with the idea of having a face to face recruitment”, she expressed.

Many persons brought their resumes and waited outside the temporary Christophe Harbour employment office where multiple mini-interview screenings were conducted.