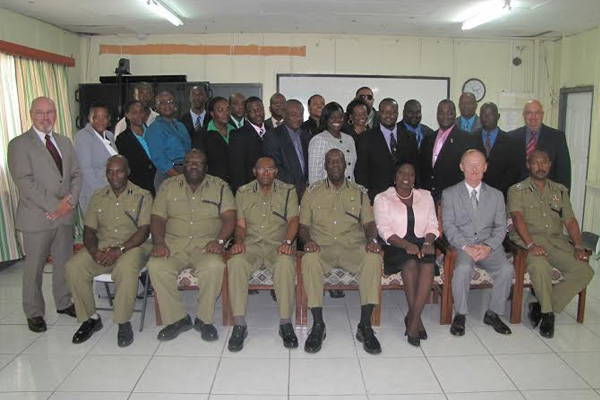 Basseterre, St. Kitts– On 13th November 2014, The Royal St. Christopher and Nevis Police Force hosted the closing ceremony of two courses that were held at the Police Training School, which were Internal Affairs Investigation Course and Audit and Inspection Courses. These courses were conducted within two weeks period and was facilitated by Mr J Michael Stiers, Mr Donald Lizotte and Mr Gary Bennett of the Department of Justice of the U.S. Embassy in Barbados under the International Criminal Investigation Training Programme (ICITAP).

Internal Affairs Investigation course was implemented to gear towards improving the ethical standards and professional conduct of Officers of The Royal St. Christopher Police Force and also build and maintain the general public trust, which is essential for successful policing. Eighteen officers were enrolled in this course.

Audit and Inspection Course focuses on audit and inspection format, effective policies and direction, inspection functions, types of inspections such as line and staff inspection, investigation responsibility, primitive discipling, just to name a few. Successfully completing this course would fill Officers with sufficient information to be a leader who has the knowledge and understanding on identifying problems and provide solution to any department in the organization.

Sgt Everton Mitchum, who was one of the participants in Internal Affairs Investigation Course, shared his perspective. Sgt Mitchum stated that: “the ethical work of Officers can very easily be undone by the action of one unethical Officer. The internal affair of this law enforcement agency will now become a primary method of reassuring our community that Police can and will aggressively address and resolve unethical behaviour. He expressed his gratitude on behalf of participants of the course to Commissioner Walwyn for his foresight and dedication to the advancement of the Force and he also thanked the facilitators in passing on the knowledge and baring with them throughout the course.

W/Sgt Marva Chiverton gave her opinion on the Audit and Inspection Course. Having done theory and practical aspect of Audit and Inspection Course, if each individual conduct an exercise in the various departments and stations, they would be able to highlight a host of problems which would negatively affect their performance. She thanks Commissioner Walwyn for putting this training and workshop together and thanked the facilitators for taking time out their busy schedule to conduct this training.

J Michael Stiers provided a course overview, Mr Stiers appreciated the efforts of the students, hospitality of Commissioner Walwyn and Supt. Moore of Training school and look forward to see how students develop in the future.

Commissioner C.G Walwyn congratulated all the participants who passed this course. He stated to the Officers who completed the course that you know what is expected of you to maintain the public trust and amongst peers within department. We must be able to show that we can Police our own and everything must be documented. He encourage graduates of the course not to put the training on the shelf, use it and help to regain the trust that the public looking for in the Police. He thanks all for being there.

Her Excellency Mrs.Astona Browne, Permanent Secretary, Anti Crime Unit registered appreciation to the facilitators for availing themselves their expertise and their time to be here with us this week to deliver on this important area of training. She highlighted that ICITAP is known for its collaborative efforts with government in developing, promoting and advancing professionalism and transparency in law enforcement institution. Profound appreciation was given to Government of United States to representation of Department of Justice at US embassy in Bridgetown, Barbados. She also acknowledge Mr Major Coleman, who pioneer several training initiative in the past and Commissioner Walwyn for pursuing such courses. To the graduates of the courses she expressed as long as they as law enforcement officers are loyal to their oath and be professional in the execution of their duties they will get the respect due to them by colleague and public that they serve. She commend all the participants of courses and encourage use the forum that approach law enforcement safety

The certificates were distributed to those who completed the course by Her Excellency Astona Browne and Mr Gary Bennett, facilitator of course. The Facilitators were also given a gift from students as a token of appreciation for their time spent in sharing their knowledge.