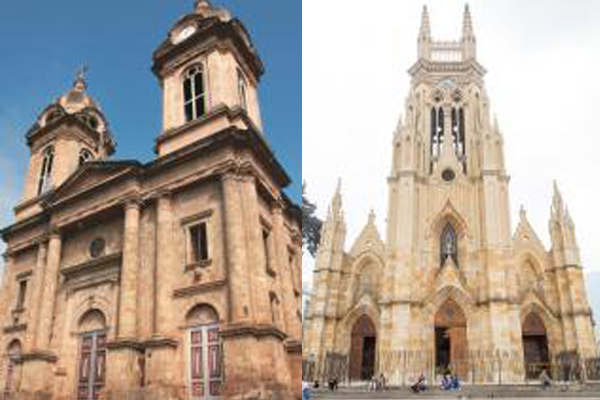 Bogota, Colombia — Colombia has become one of the most acclaimed international tourist destinations. With its slogan “Colombia is Magical Realism,” the country seeks to draw travelers by promoting its various tourism attractions according to their interests, including religious tourism. For the Easter break season, and throughout the year, Colombia offers 500 years of religious tradition that is reflected in an architectural, artistic and cultural heritage associated with the Catholic religion.

PROCOLOMBIA, the promotion agency of the Colombian government, presents the facets of religious tourism through a travel portal, where domestic and foreign tourists may find relevant information for their trip focused on these types of activities. During Holy Week – the week before Easter and the final week of Lent – visitors to Colombia will find a variety of activities and attractions such as churches, shrines, pilgrimages and festivals around the country.

“We identified that the international tourist is interested in having practical information and online tools that allow them to geo-locate sights and publish photographs of their experiences which may motivate more travelers to live the same experiences,” said Maria Claudia Lacouture, president of ProColombia.

For religious tourists in Colombia, here are seven sights during Holy Week not to miss:

Santa Cruz de Mompox is located north of Colombia in the Bolivar sector. It was declared a Historical and Cultural Heritage Site by UNESCO and this is where the only marched processions take place in Colombia where pilgrims take two steps forward and one back as they walk along the procession.

El Santuario de Nuestra Señora de las Lajas, in the town of Ipiales (Nariño), is referred to as the “miracle of God over the abyss” by the appearance of the “Virgen del Rosario” on-site in the late eighteenth century. The Sanctuary built in a Gothic architectural style was declared the second wonder of Colombia in 2007 and is visited by tourists and pilgrims from around the world.

The capital of Cauca, Popayán is located in the middle of the central and western mountain ranges of the country and is crossed by the Cauca River. Holy Week in Popayan, carried out since 1566, is the country’s largest religious celebration. The processions, declared by UNESCO in 2009 as Intangible Cultural Heritage of Humanity, attract thousands of tourists every year. The tour of the Archdiocesan Museum of Religious Art, the festival of religious music and “little processions” or children, are activities not to miss while visiting this city.

La Catedral de Sal (Salt Cathedral) is located on the outskirts of Bogota and it’s rated as one of the principal wonders of the country. The most amazing thing about this place is the architectural ingenuity to create a solemn and majestic Catholic church in an underground old salt mine, 180 meters below the surface, projecting the path of the Cross and the huge 16-meters cross carved into the nave.
Pamplona

The town of Pamplona, in Norte de Santander, is highlighted not only by devotion, but also by the details of the figures which are used to perform the Stations of the Cross during Holy Week. Another attraction here is the dedication of a space for children during this religious celebration, known as “Infant Easter Week.”

Cartagena, known as a destination for sun and beach, water sports and chic boutique hotels, also has a religious heritage reflected in its architecture. Sites to visit are The Cathedral of St Catherine of Alexandria located in the historic center of Cartagena, which was built in 1577 and completed 84 years later; and the Plaza de San Pedro Claver, which has a statue of San Pedro Claver (the Jesuit missionary who was called ‘slave of slaves’) by artist Enrique Grau is located by the church of the same name.