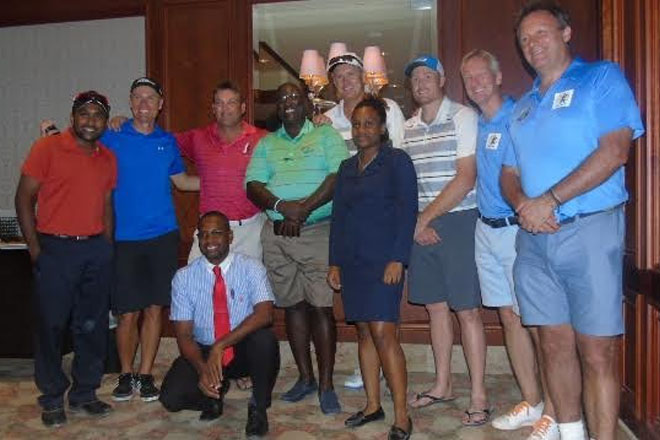 The main aim of the group was to play a round of Golf at the prestigious Four Seasons Resort.

After enjoying a round of Golf on the picturesque greens at Four Seasons, the men settled in at the Hibiscus room for a press conference.

Mr. Russell and the three world class cricketers fielded questions from the press.

Jayawardene and Guptil both expressed complimentary views on the batting of Tonito Willet during the Patriots encounter versus the Tallawahs.

‘He is very talented,’ said Guptil. ‘We had lost an early wicket and we needed a partnership and we stayed and built one,’ he said.

Jayawardene noted that when they saw Willet in the lineup, questions were raised and it was expressed that he was a talented player and he really showed it on the field of play.

Also present at the press conference was Permanent Secretary in the Ministry of Sports, Mr. Keith Glasgow, who warmly welcomed the men to Nevis and gave a brief historical overview of the achievements of local Cricket stars.

Included in the specially invited guests were Denrick Liburd, President of the Nevis cricket Association and past President Keith Scarborough, who sought to appeal for assistance for the NCA, to which Mr. Pete Russell responded positively in stating that such assistance can be arranged as the CPL would love to leave some sort of a legacy in St.Kitts and Nevis.

The group left for St.Kitts via one of the Four Seasons’ boats as the cricketers were scheduled for practice sessions at 3 pm.