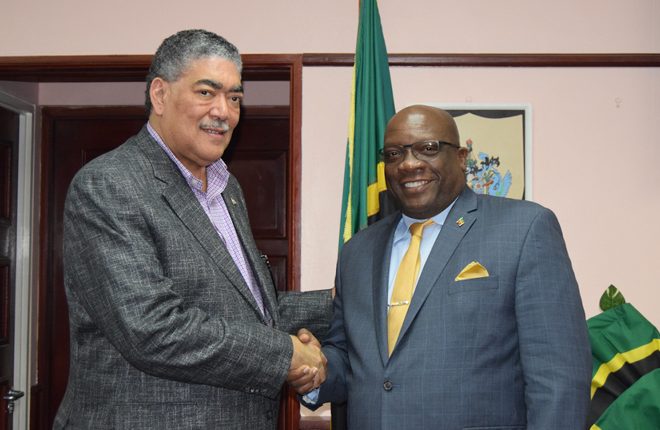 BASSETERRE, ST. KITTS, JANUARY 20TH, 2017 (PRESS UNIT IN THE OFFICE OF THE PRIME MINISTER) – Discussions on the pursuance of bilateral cooperation between St. Kitts and Nevis and the Dominican Republic took place on Thursday (January 19th, 2017), when Prime Minister Dr. the Honourable Timothy Harris met with the Dominican Republic’s Minister for Regional Integration, the Honourable Miguel Mejía.

During the meeting, held in the Prime Minister’s office at Government Headquarters, the two officials discussed the possibility of future cooperation in the area of transport, education and culture.

The Honourable Prime Minister said St. Kitts and Nevis and the Dominican Republic “share a special relationship” going back to the days of the sugar industry, when hundreds of Dominicans came to the federation to work in the industry up until its closure in 2005.

“We have a large number of citizens from your country who are residing here as citizens and permanent residents. We welcome them and are happy to have them, Dr. Harris said, adding, “I believe that we can do much more bilaterally to assure them of the special bond between our two governments and our two peoples.”

“We can look at cooperation in education because one of the challenge for us is having persons now sufficiently knowledgeable in teaching the students who are coming from Spanish families and that is an area then that you certainly can help us. We have to have some conversation on how we are going to help them to integrate more quickly into the communities and what kind of support we can coordinate between the two governments to make this mutually beneficial for all of our people,” the prime minister continued.

Minister Mejía also used the meeting to extend a personal invitation from the President of the Dominican Republic, Danilo Medina, to Prime Minister Harris to attend the next Summit of Heads of State and Government of the Community of Latin American and Caribbean States (CELAC).

In response, Prime Minister Harris indicated that he has already agreed that Minister of Foreign Affairs, the Honourable Mark Brantley will attend the CELAC meeting, but added, “if per chance it becomes possible, we certainly would let you know and I would be delighted to come.”

CELAC was created on February 23rd, 2010, on the initiative of Mexico, at the Unity Summit in the Riviera Maya with the main objectives of expanding regional integration and promoting political cooperation and the Latin American and Caribbean agenda.

The next summit will be held in Punta Cana, Dominican Republic later this month.