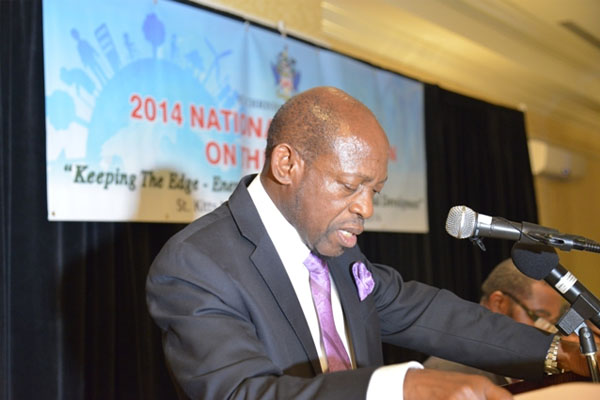 St. Kitts and Nevis’ Prime Minister and Minister of Finance, the Rt. Hon. Dr. Denzil L. Douglas said the Ministry of Finance has confirmedthat the performance of the fiscal account was stronger in 2013 than the performances in 2011 and 2012.

“We are growing from strength to strength. We have comfortably exceeded the targets agreed with the IMF to reach an overall surplus in the region of 12 percent of GDP and a primary surplus of 15 percent of GDP. This trend of strong fiscal performance has continued into thefirst half of 2014 with the achievement of an overall surplus and primary surplus for the Central Government of above $100 million respectively. This is an achievement that we should be proud of as we have successfully moved from a position of deficit and high fiscal imbalance to surplus on all fiscal accounts,” said Prime Minister Douglas at the 17th Annual Consultation on the Economy.

He told stakeholders from the private sector, non-governmental organisations and public officials that his government’s strong expenditure containment measures, the continued expansion of revenues through economic recovery, the continued implementation of a comprehensive programme of fiscal reform and the inflows of revenue from our Citizenship by Investment (CBI) programme continue to contribute to the positive fiscal results.

“Going forward my Government intends to maintain the fiscal discipline adopted during the period of adjustment under the Stand-By Arrangement with the International Monetary Fund (IMF),” said Dr. Douglas, who is also Minister of Finance.

“We must celebrate the fact that we have successfully completed 36 months of implementation of our home grown adjustment programme with the support of the IMF,” said Dr. Douglas, who stressed that celebrating this important milestone “the evidence is there to indicate that the policy efforts of my government are yielding dividends and we have emerged stronger than ever.”

“This strength is demonstrated in so many ways, for example in public financial management, debt management, economic growth and social progress,” said Dr. Douglas.

At the risk of annoying a few in the audience, the St. Kitts and Nevis leader restated for the record “that our strength has been soundly demonstrated in the early repayment of some $46.1 million to the IMF; representing about one fourth of the money borrowed under the Programme. This is an extraordinary performance as it is a rare occurrence for any country anywhere in the world to make payments to the IMF so far ahead of schedule and in such large amounts.”

He disclosed that over the next several months “we expect to complete the debt restructuring exercise with the conclusion of the remaining elements of the debt-for-land swap and the finalization of negotiations with a few remaining creditors.”