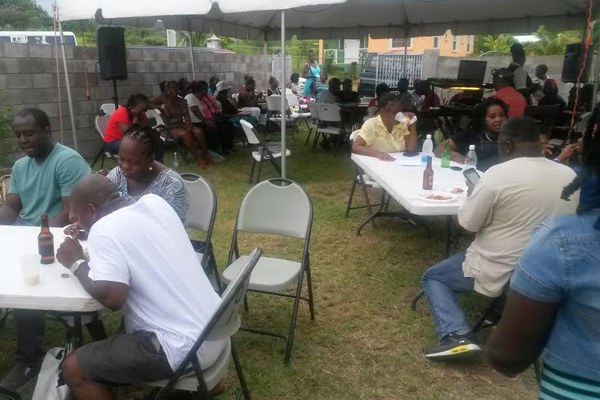 Basseterre, St.Kitts — In an effort to show appreciation to his constituency workers and supporters,the St. Kitts-Nevis Labour Party candidate for Constituency Eight, Dr. Terrance Drew, on Sunday 21st September, hosted a get-together at his home in St.Peter’s.

Chairperson of the Labour Party and Parliamentary Representative for Constituency Two, Hon. Marcella Liburd and the Party’s Deputy Chairman, Sen. Nigel Carty were among those present as well.

Music was provided by DJ Source.

Speaking to a member of his public relations team, during the social gathering, Dr. Drew hailed the event a success.

“Well this evening’s event was about bringing all of our supporters and workers together and I think the event was quite successful. I think that the workers responded very well to our invitation which shows their commitment to the upcoming Elections and to the Labour Movement in general and so I’m elated with the response that we have gotten today.”

He also expressed delight that attendees had a great time.

“As you can see the people have enjoyed themselves tremendously …song and dance, karaoke…eating and drinking; everybody is mingling and developing new relations… greater, deeper and closer bonds and that is what it’s all about. It’s about them; it’s about the people always and bringing them together. I think it was a successful event on various fronts but most of all I think that our people have shown that they can build togetherness and with that we can move forward.”

Meanwhile, some of Dr. Drew’s supporters took the opportunity to wish him well as they spoke confidently about him being poised to win his seat following the next General Elections.

“I met Dr. Drew a few years ago and from what I really picked up is that he is a very, very good choice. He is timely. Dr. Drew is a humble guy, a people-oriented person, one who listens to the plight of the normal man and one who is really anxious in seeing people progress; people moving forward. I’m looking at Dr. Drew as a future leader of this country… just the way he puts over himself, the way he relates to people and his love on a whole for people. I think that St.Kitts-Nevis on a whole will come to realize what a remarkable young man that we will be having serving us. Without any shadow of a doubt, I know directly that Dr. Drew will definitely win his seat in Constituency Number Eight. When you look at the trend and the mood of the people, in a matter of time he will go to Parliament to represent the people of Number Eight and the country as a whole.”

“I have confidence in Dr. Drew. He is very friendly… people’s person. He is there for the community and when Dr. Douglas rings the bell, on Election Day, he will definitely get my vote.”

“I am a neighbour of Dr. Drew. We went to school together so knowing him a little personal , he has a very nice personality and I think that his endeavour in this would be of a very much success because of his personality and his outspoken(ness), his interaction with people… it’s very good and I personally (I am) voting for him to be the next candidate in Parliament because of what I know about him.”

Dr. Drew wishes to thank all who attended as well as all contributors who collectively helped to make the event a success.

Furthermore, he extends heartfelt gratitude to his fellow constituents for their continued support.