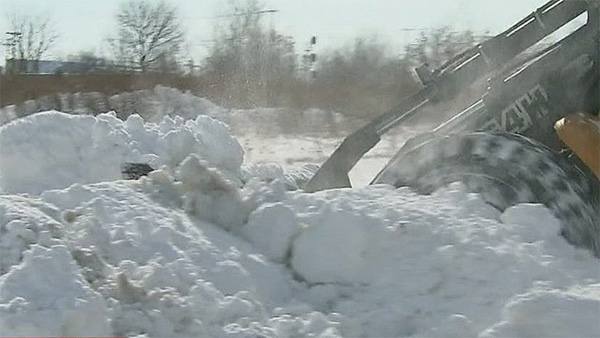 Eight dead in storm as Buffalo braces for more snow

Shivering under up to 6 feet of snow in its hardest-hit sections, Buffalo, New York, could see another 3 feet Thursday.

If the forecast holds, that’s more than a year’s worth of snow in just three days. In a typical year, Buffalo’s snowfall totals about 7 feet, according to the National Weather Service.

The extreme conditions have led to tragedy in and around Buffalo. Eight people have died, including four who suffered cardiac issues while they shoveled snow and one who died in a car accident, Erie County officials reported. A man in his 60s had a heart attack while he tried to move a snow plow or a snow blower, Erie County deputy executive Richard Tobe said Thursday.

In Alden, New York, a 46-year-old man was found dead inside a car buried in 12 to 15 feet of snow.
In Genesee County, Jack Boyce, a 56-year-old county employee, died after collapsing Tuesday morning while operating a snow blower outside the county sheriff’s office, according to county manager Jay Gsell.

Piled high and deep, the snow is a nightmare for south Buffalo residents Donna and Sean Yager. It took them almost five hours to free their car from its snowy confines.

Neighbor Rick Gayhart has lived in Buffalo all his life and said he’s never seen snow like this before.

In the Buffalo suburb of Cheektowaga, Chrissy Hazard found herself trapped in her own home, surrounded by 5 1/2 feet of snow.

She has plenty of company: her husband, a friend, seven children and some dogs.

Everything’s all right for now, she told CNN’s “Anderson Cooper 360.”

Buffalo Mayor Byron Brown and city officials Wednesday recounted stories of rescuers trudging around snow drifts as high as houses to get people to hospitals, of fire stations turned into temporary shelters and police officers delivering special baby formula to a pair of infants.

“It is clear that we are one Buffalo,” Brown said.

Buffalo prides itself as “The City of Good Neighbors,” and New York Gov. Andrew Cuomo noted that it has “come together and shown a real sense of community and neighbor helping neighbor, which is always good to see.”

Wednesday night’s football game between the University of Buffalo and Kent State was postponed because the visitor’s equipment truck didn’t arrive on time. The game could be played Thursday or on another date, school officials said.

The NFL is keeping a close eye on the weather too. The Buffalo Bills are scheduled to play the New York Jets on Sunday.

The storms will be long gone by then, but Ralph Wilson Stadium is a mess, buried in an estimated 220,000 tons of snow.

“We have not had this much snow as far as we know in the history of our team,” said Andy Major, a Bills vice president. “It might take three days or so to remove one foot of snow before a game and now we’ve got four feet of snow on a 200-acre site where there’s potential for more coming. So right there it gives you the magnitude.”

The team is offering tickets to the game and $10 an hour to anyone willing to help remove the snow.
Snow removal crews will get some help from the forecast.

Temperatures are expected to climb higher than the freezing point on Saturday and reach the 50s on Sunday, the National Weather Service said. But rain is also likely.

“That would be a terrible thing,” CNN Severe Weather Expert Chad Myers said. “If it rains — and it probably will at least on the weekend — all of that snow is not going to melt right away. That snow is going to hold that rain in and then that snow on top is going to get heavier and heavier.”

And that could stress buildings already buried under several feet of snow.

Driving is still treacherous in many parts of Buffalo. The mayor predicted a “long way to go” before efforts to clear the city’s roadways are finished. Already, more than 6,500 tons of snow have been removed from city streets and highways.

“It is going to be a slow go,” Brown said. “Historic amounts of snow have fallen. There is no place to put that snow.”

Instead of plowing the snow, front-end loaders are scooping it up and piling it into the back of dump trucks to be hauled away.

Contractors and city crews are working 24/7 to clear the 10 square miles that have been pummeled by lake-effect snow, caused by Arctic air pouring over the relatively warm waters of the Great Lakes.

Trapped at the fire station

The snow left people stranded in cars and turned roadways into parking lots. But it also forced residents to seek shelter in unusual places.

About 70 people took refuge at a Buffalo fire station — a figure that increased by one overnight. A baby girl was delivered there when an ambulance was unable to take her mother to the hospital, Buffalo Fire Commissioner Garnell Whitfield said.

“She was born, she’s safe and she’s healthy,” Whitfield said.