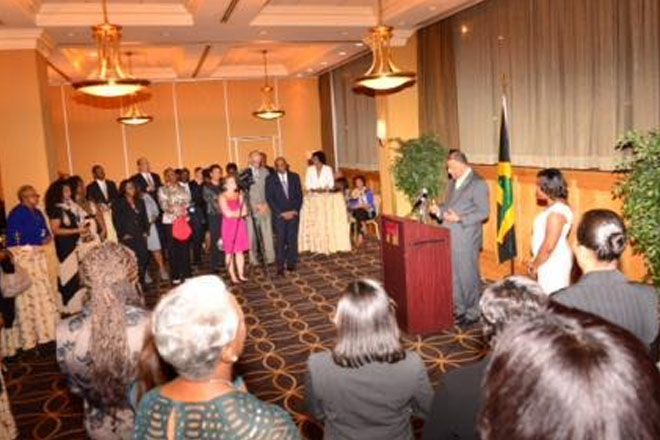 Washington, USA — Energy, security, trade and economic development are among top priorities that the new Jamaican ambassador in Washington, Ralph Thomas, intends to further develop with the United States, at the state and federal levels.

Thomas also stated his intention to focus, at the bi-lateral level, on cooperation in health and education; having Jamaica upgraded in the [US] trafficking in-persons report; climate change; and food security.

In wide-ranging remarks on Thursday, October 8th, 2015, in Washington DC to Jamaicans in the Diaspora, representatives of federal and state governments and members of the diplomatic corps at a reception held in his honour, Thomas said that he would be interfacing with US authorities to ensure that these priority areas receive due attention. He said these are critical areas that will help Jamaica move forward.

The Jamaican envoy, who is also his country’s permanent representative to the Organization of American States (OAS), told the large audience that he would be engaged with hemispheric issues, key among them the promotion and protection of democracy, human rights, hemispheric security and sustainable development.

Thomas said that, through collective efforts, these multi-lateral engagements are critical to ensuring our region remains stable and for member countries to advance in the area of security and economic developments.

Turning to the Diaspora, the ambassador said cultural awareness must be promoted, especially among second- and third-generation Jamaicans; the fraternal bonds between the Jamaican Diaspora in the US and Jamaicans back home strengthened; and support and guidance provided for philanthropic initiatives.

“The time has come when we must mobilize the Diaspora to have a greater voice in the respective communities in which we reside,” said Thomas.

To this end, he said he would be seeking to promote better youth engagement and exchange between Jamaica and the USA, in which “our next generation can share in our rich cultural heritage.”

He assured the audience of his intent actively to serve, not just those who reside in the District of Columbia metropolitan area, but across the length and breadth of the USA wherever there are Jamaicans.