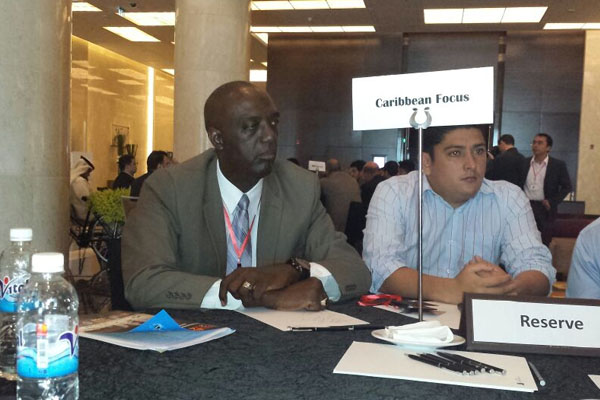 The Commissioner was nominated to represent the Association of Caribbean Commissioners of Police (ACCP) at the September 23 to 25 conference held in Vietnam. The organization’s President David Baines was also slated to attend the conference organized by the International Criminal Police Organization (INTERPOL) but was unable to do so.

While at the meeting, the Commissioner formed linkages with a number of partner agencies including one based in Trinidad that will assist local authorities in developing protocols of inspection and other areas. He also made it possible for officers to pursue free training at the International Intellectual Property Crime Investigators College (IIPCIC).

“I was able to sign up the police force in St. Kitts and Nevis,” Commissioner Walwyn explained. “I signed up first and now anyone of my officers who choose … they can sign up for that college and take the training. I also signed up Her Majesty’s Customs and Excise Department with the permission of Comptroller [Geroid] Belle while I was there … I signed him up and now any member of Customs enforcement can also take these courses.”

The successful reforms in the local police agency that resulted in a reduced crime rate as well as Commissioner Walwyn’s experience in policing and background as an investigator in the United States, where he often worked closely with Federal law enforcement agencies, made his representation of the region a natural selection.

“This was another of the international training courses that were presented to St. Kitts and Nevis. We didn’t ask to go, they recommended that we attend,” he explained, noting that he first learnt about the conference during a meeting in Ecuador. “By the time I got home the ACCP contacted us and asked me to attend so it’s all a part of networking and the best part about it is they (INTERPOL) were the ones who paid for the ticket. It didn’t cost anything for me to go except my time.”

The information, techniques and best practices exchanged at the IP meeting will be compiled into a report and submitted to the ACCP. Training will also be done with local police and customs agents.