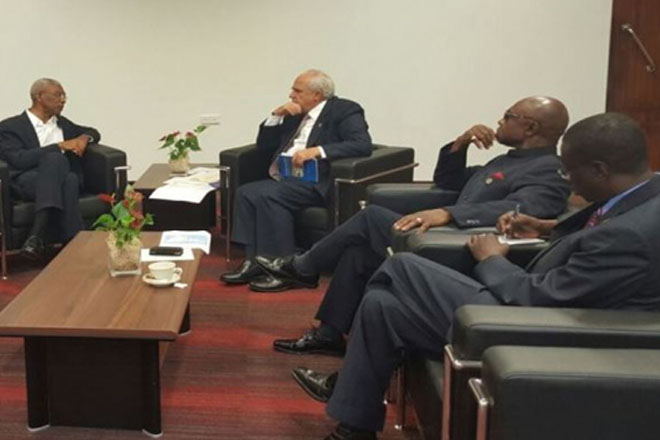 Guyana can serve as a bridge between CARICOM and UNASUR, says president

Paramaribo, Suriname (GINA) — President David Granger, in pledging Guyana’s support to the Union of South American Nations (UNASUR), stated that Guyana can serve as a bridge between UNASUR and the Caribbean Community (CARICOM).

During the meeting Granger told Pizano that Guyana is committed to the infrastructural integration of South America. The Guyanese leader also noted that the objectives of UNASUR can only be fulfilled under a framework of peace and mutual respect among the states of South America.

More importantly, Granger pledged his support to cooperate fully to ensure there is no disturbance of peace on the continent as he reaffirmed Guyana’s rejection of the use of threats and force to settle differences.

UNASUR, created in 2008, is a multilateral organisation with membership coming from 12 of the 13 nations in South America. It is an intergovernmental union integrating two South American trade blocs; Mercosur; a regional trade agreement among Argentina, Brazil, Paraguay, and Uruguay) and the Andean Community of Nations; a trade bloc comprising Bolivia, Colombia, Ecuador, and Peru.

Granger and a delegation are currently in Suriname to participate in the inauguration ceremony for that country’s president, Desi Bouterse.