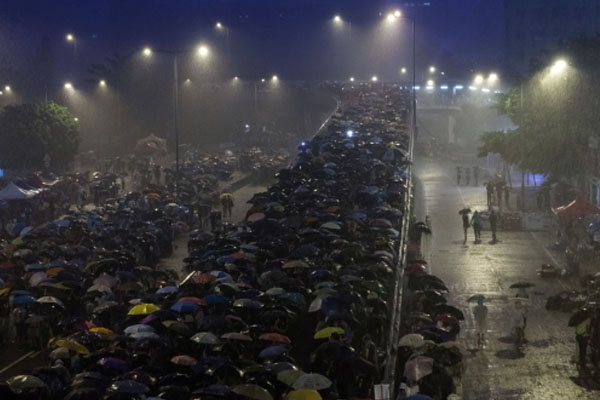 Hong Kong, (AFP) — Hong Kong protesters were under pressure Monday to end their pro-democracy campaign as their numbers dwindled after a chaotic week of mass rallies, and frustration grew over disruption and traffic gridlock.

The demonstrations that had drawn tens of thousands evaporated Sunday night in the face of a warning from Hong Kong’s embattled leader Leung Chun-ying to leave the streets and allow government offices to reopen.

Crowds ebbed to just a few hundred weary activists at their main site in the harbourside Admiralty district but were beginning to gradually pick up again as people left work and headed back to the streets late Monday.

Student leaders denied their campaign for free elections had lost momentum, saying they were dug in and would remain until the Government agrees to conditions for talks on political reform.

But Leung issued another warning to disperse, saying they should leave the flashpoint district of Mongkok on the Kowloon peninsula, which has seen ugly scuffles with triad mobs, “as soon as possible”.

“To prevent violent crime and to reduce the amount of injuries, police will take action at the right time,” Leung said in a televised address, describing the area as “high risk”.

The protesters and their well-organised campaign have enjoyed strong public support, with sympathy soaring after police used tear gas on the crowds. But after shutting down parts of the city for more than a week, irritation has grown.

Highways were jammed with traffic and subway trains were packed Monday as frustrated commuters tried to find their way to and from work, battling cancelled bus routes and road diversions.

The protesters are demanding free and open elections to select the former British colony’s next leader in 2017. China’s Communist authorities insist only pre-approved candidates will be able to run, a system critics dismiss as “fake democracy”.

Handed back to Chinese rule in 1997, Hong Kong is governed under a “one countries, two systems” deal that guarantees civil liberties not seen on the mainland, including freedom of speech and the right to protest.

But tensions have been rising over fears that these freedoms are being eroded, as well as rising inequality in the high-cost and space-starved Asian financial hub — a dynamic that could fuel future unrest.

“I think it may drag on for some time because we haven’t seen any progress at all in terms of negotiation,” said political analyst Ma Ngok.

University leaders and other movement supporters have been trying to persuade the remaining students that they should beat a tactical retreat.

“I think it’s a wise decision to make a strategic draw down (of people on the ground) as it’s hard to convince the public that continuing the blockade would achieve results,” political analyst Willy Lam told AFP.

“If talks between the students and the Government prove totally futile… and (Chinese president) Xi Jinping is against concessions, then it’s possible to switch on the movement again.”