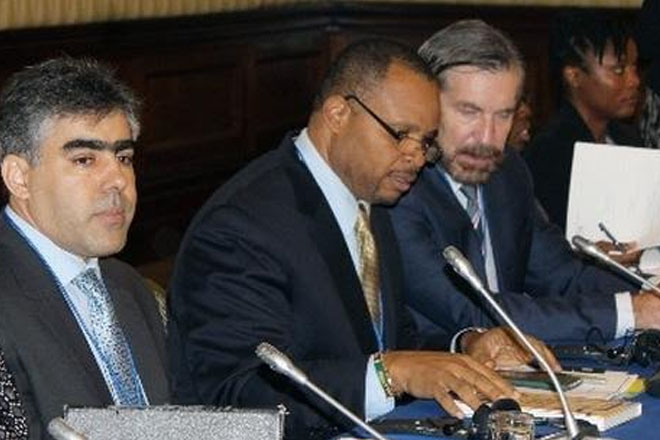 Bridgetown, Barbados (BGIS) — Members of the international community need to do much more than “study the situation” of developing states in economic crises; they need to develop a plan to assist them in debt recovery.

That view was expressed on Wednesday by Barbados’ finance minister, Christopher Sinckler, while speaking at the XI Annual Meeting Group of Latin American and the Caribbean Debt Management Specialists (LAC Debt Group).

“For us small states, it is not enough to just speak almost despairingly about our negative debt matrices as if pouring scorn on us for daring to pursue the development of our people and societies. And it is certainly not enough to keep sending missions of sterilised technocrats and academics to ‘study the situation’, and if we are lucky, publish a book to which we get entitled to a free copy. No!

“That is not what the Caribbean needs. What we need is for the hemispheric and global community to act in a way demonstrative of their often exclaimed but yet to be realised desire to help the region’s countries deal with the elephant in the room. Don’t just throw the zoo keeper to the wolves of international financial capital such as the IMF, for yet another visionless and impractical adjustment programme. Rather, grant us no less favour than that which was given to the Heavily Indebted Poor Countries (HIPC) during the 1990s. Anything less would be considered by us as abandonment by the international community of small and vulnerable states,” he stressed.

Pointing out that the Caribbean was “heavily indebted” with six of 13 countries among the ten most indebted middle-income countries in the world, Sinckler explained that the region was working together through a Caribbean Community (CARICOM) Commission on the Economy which focuses, inter alia, on such matters.

“In this regard, that Commission has been focusing its attention on developing a regional response to both the analysis of the issue of debt and its impact on our economies, and latterly on devising a coordinated regional response to seeking debt relief from domestic, regional and international creditors,” he explained.

He added that as recently as last month, regional financial leaders and technocrats attending the UN Financing for Development Conference in Addis Abba, Ethiopia, were “evangelical in their insistence that there must be a serious, workable and timely international debt relief programme to assist small vulnerable economies”.

Addressing the economy at the local level, the minister pointed out that government had taken steps toward improving its debt management process, and was committed to embarking on its own set of public debt management reforms. According to him, with the assistance of development partners like the Commonwealth Secretariat, Caribbean Regional Technical Assistance Centre (CARTAC) and the Inter-American Development Bank (IDB), government had critically evaluated Barbados’ debt management system, with a view to making much needed improvements towards ultimately crafting a better framework built on best practice.