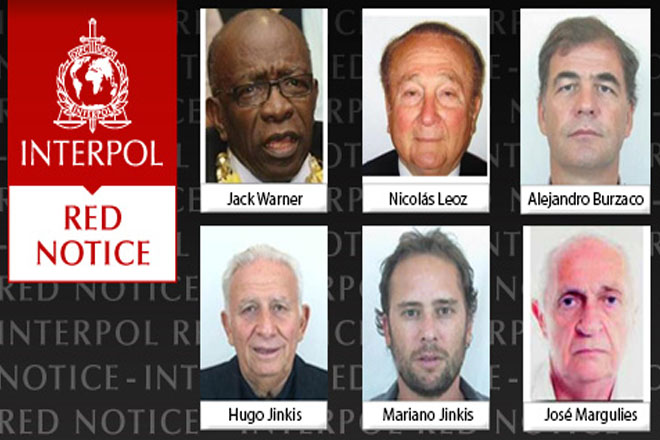 London, England — Interpol issued wanted person alerts (“red notice”) on Wednesday for Trinidad MP Jack Warner and one other former senior FIFA official and four corporate executives, one day after Sepp Blatter’s surprising announcement that he would resign after 17 years as the head of football’s governing body.

Blatter’s announcement came just four days after he was re-elected as FIFA president, and as law enforcement officials in the United States confirmed that he was the subject of the federal corruption investigation that has ensnared the organization.

The Interpol alerts, so-called red notices, issued at the request of the United States, include the former FIFA vice president Warner, who is from Trinidad and Tobago and is accused of accepting bribes in connection with the awarding of the 2010 World Cup to South Africa; Nicolás Leoz, a Paraguayan citizen and former FIFA executive committee member; Alejandro Burzaco, an Argentine who controls a sports marketing business based in Argentina; Hugo and Mariano Jinkis, Argentines who own a sports marketing business; and José Margulies, a Brazilian citizen who owns broadcasting businesses.

Publishing head shots of the six men on its website, Interpol said they were wanted “for charges including racketeering, conspiracy and corruption.”

Red notices are issued by Interpol to inform member nations that an arrest warrant has been issued for an individual, and that Interpol is seeking “the location and arrest of wanted persons with a view to extradition or similar lawful action.” However, red notices are not international arrest warrants, and Interpol does not have the power to compel other countries to arrest the subject of a red notice.