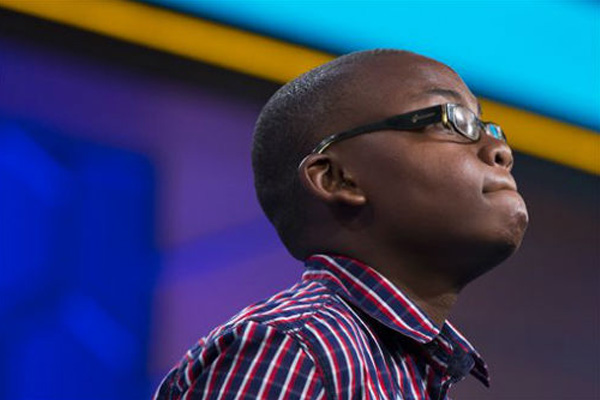 OXON HILL, Md (AP) — Jacob Williamson shrieked with delight, sank to his knees and pounded the stage as his name was called as one of the 12 finalists in the Scripps National Spelling Bee.

In the list of 12 finalists is 13-year-old Tajaun Gibbison of Mandeville, Jamaica. The only international winner in the bee’s history also hailed from Jamaica.

Meanwhile Jacob, easily the most demonstrative of the dozen spellers who will compete Thursday night for more than US$33,000 in prizes, said he was surprised to have made it so far in his first National Spelling Bee appearance. The 15-year-old home-schooled eighth-grader was even more amazed that two of last year’s finalists won’t be joining him.

Vanya Shivashankar, a three-time finalist whose older sister won the bee in 2009, was bounced after Thursday’s semi-final round. Vanya, a 12-year-old seventh-grader from Olathe, Kansas, spelled two words correctly onstage with her usual aplomb, but she did not score highly enough on two computerized spelling and vocabulary tests to advance.

The finalists include only one holdover from last year: 14-year-old Sriram Hathwar of Corning, New York, who finished third. Another former finalist, Syamantak Parma of Friendswood, Texas, misspelled ‘circumforaneous’, which means “wandering from place to place”, and saw his final appearance in the bee end with the dreaded ringing of a bell.

“That was a shocker,” Williamson said. “Two of the big three are gone. The holy trinity of spelling!”

Sriram hopes his experience — and another year to study and shore up his weaknesses — will pay off. He says he’s studied the dictionary so much that he has a “GPS system” in his brain and can recall the page where a word appears.

“On the page, I have a general sense of where the word will be when they ask it. It’s like flipping through the dictionary in my mind,” Sriram said.

Many spellers go through a routine before spelling a word. Even if they know it, they’ll ask questions to make sure: definition, language of origin, part of speech, alternate pronunciations. Finalist Kate Miller of Abilene, Texas, said she’d ask all those questions even if she was asked to spell “cat”. Then, before spelling, the lanky eighth-grader “air-types” the word on an imaginary keyboard before spelling it.

“When you’re nervous, it feels good to have an outlet, shake your sillies out as they say,” Kate said. “As a dancer, I am a firm believer in muscle memory.”

But Jacob doesn’t think any of that is necessary. He knew both words he got during the semi-finals, including ‘euripus’, a narrow tract of water with violent currents. He yelled “I know it!” and, after spelling it correctly, he shook his fists in the air.

“I’m calm but I’m very excitable at the same time,” he said. “I know what I know and I know there’s not a ton about spelling words that I don’t know. I’m confident that either I’ll get a word I know or I’ll get a word I can piece out.”