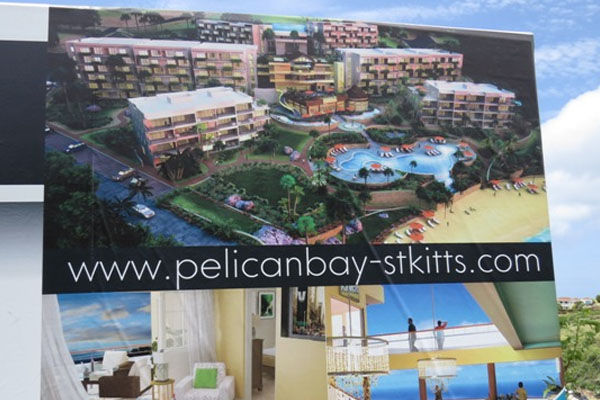 Basseterre, St. Kitts (CUOPM) — Another sign of full confidence in the St. Kitts and Nevis economy.

Sterling Investments Limited (SIL) has disclosed it has invested 7.5 percent of its growing private equity portfolio in a condominium development in St Kitts that targets subscribers to St. Kitts and Nevis’ Citizenship by Investment Programme.

The company has purchased preference shares in Pelican Bay Limited (PBL) on which it earns 8 percent per year. PBL is the main investor in the condominium complex.

The citizenship programme requires foreigners to invest capital of US$400,000 to qualify.

She said Sterling Asset Management Limited (SAM) was the arranger of financing for the real estate project into which SIL has poured $55.9 million.

Jamaican construction company, Surrey Paving, is the contractor on the project as well as an investor in PBL, said Ross.

The majority of the shareholders in SIL are pension funds, retirees and individual local equity investors; its board is chaired by Derrick Jones, while the other directors are Michael Bernard, Max Rochester and Charles Ross.

Charles is also the head of Sterling Asset Management, which acts as investment manager for SIL.

“SAM and SIL are distinct corporate entities. SIL has an independent board of directors that monitors the actions of the investment manager,” said Marion.

Last December, Sterling Investments sold additional shares to existing shareholders and others, raising J$168 million, which Charles Ross later said was intended to take the company up to the 100 shareholder minimum required by the Jamaica Stock Exchange.

Marion, noting that the company was “committed to future capital raises in order to give other institutional and individual investors an opportunity to take advantage of the investment,” said another rights issue was pending, but the date is still to be finalised.

Company documents state that SIL is 92 percent invested in US dollar assets, that the company generates revenue from interest income from securities in the portfolio, and through capital gains realised from increases in the price of the securities.

SIL released its audited 16-month results ending December 2013, which put the company’s revenue at $70 million, $37 million of which were realised from foreign exchange gains. Profit for the same period was $46 million.

For the year 2013, the company said it paid dividend of $2.96 per share, totalling $7.912 million for a dividend yield of approximately three percent.

Marion said the proposed dividend policy for SIL on listing is 30 percent of annual profit.

Prime Minister Harris to Host His Next Press Conference on Tuesday, September 28

Saint Lucia Wishes The Government And People Of St. Kitts And Nevis A Happy 38th…

St. Kitts And Nevis Continues To Engage With Azerbaijan