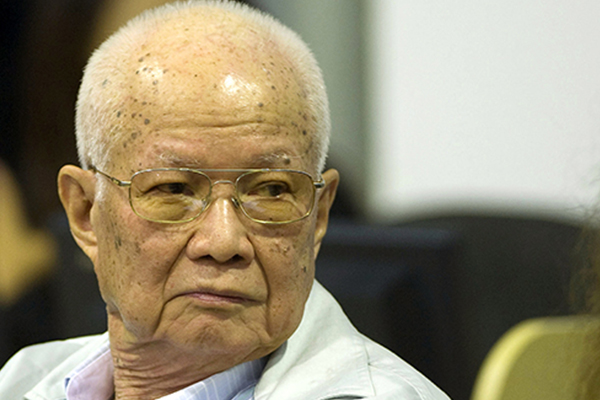 PHNOM PENH, Cambodia (AFP) – Two Khmer Rouge leaders were jailed for life on Thursday after being found guilty of crimes against humanity, in the first sentences against top figures of a regime responsible for the deaths of up to two million Cambodians.

Neither “Brother Number Two” Nuon Chea, 88, nor former head of state Khieu Samphan, 83, betrayed any hint of emotion as the sentences were handed down.

But outside the UN-backed court, regime survivors applauded, many weeping after a 35-year wait for justice.

Judge Nil Nonn said the defendants, who are the most senior surviving Khmer Rouge leaders, were “guilty of the crimes against humanity, of extermination… political persecution, and other inhumane acts”.

Their lawyers swiftly announced an intention to appeal the verdict, but the judge said the gravity of the crimes meant the pair “shall remain in detention until this judgment becomes final”.

Prosecutors had sought the maximum life terms for the men, who played key roles in a regime that left around a quarter of the country’s population dead during the “Killing Fields” era from 1975-1979.

Led by “Brother Number One” Pol Pot, who died in 1998 without ever facing the Courts, the Khmer Rouge dismantled modern society in their quest for an agrarian utopia.

Regime atrocities affected virtually every family in Cambodia as Pol Pot’s peasant army — infamous for their red chequered scarves and dark clothing — slaughtered perceived enemies of their revolution and emptied towns and cities at gunpoint to work in the fields.

The plan spectacularly backfired, leading to the collapse of the economy and mass starvation.

Nuon Chea, wearing his trademark sunglasses, sat in a wheelchair in the dock as the verdict was read, while Khieu Samphan stood impassive next to him.

Late in their two-year trial both men expressed remorse for the suffering the Khmer Rouge inflicted on Cambodia, but remained staunch in denying knowledge of its crimes at the time.

The ruling is likely to bring a level of relief to those who survived the Khmer Rouge years, which saw much of Cambodia’s population wiped out by starvation, overwork, torture or execution by ruthless Khmer Rouge cadres.

“This is the justice that I have been waiting for these last 35 years,” said 70-year-old survivor Khieu Pheatarak, one of a few dozen survivors at the Phnom Penh-based court to hear the verdict.

“I will never forget the suffering but this is a great relief for me. It is a victory and an historic day for all Cambodians,” she said.

She was among tens of thousands forced from their homes in the capital in 1975 by gun-toting regime cadres.

Amnesty International called the verdict a “crucial step towards justice” more than three decades after the regime crumbled at the hands of Vietnamese invading forces.

But in spite of the verdict, many observers and victims fear the ageing Khmer Rouge leaders may not live to serve much time in jail — if their sentences are upheld.

Former foreign minister Ieng Sary died aged 87 last year while still on trial. His wife Ieng Thirith was released in 2012 after being ruled unfit for trial due to poor health.

The complex case against Nuon Chea and Khieu Samphan was split into a series of smaller trials in 2011 for reasons including their advanced age and the large number of accusations.

Considered one of the regime’s chief architects, Nuon Chea “planned, ordered, instigated, aided and abetted” extermination and forced evacuations according to the trial judge.

He was Pol Pot’s deputy but after the fall of the regime he joined rebels in the forested Thai-border area but defected to the government along with Khieu Samphan in 1998.

After Thursday’s verdict the men were returned to their cells in a purpose-built detention centre next to the court.

In its breakthrough first trial, the court in 2010 sentenced former prison chief Kaing Guek Eav, better known as Duch, to 30 years in prison — later increased to life on appeal — for overseeing the deaths of 15,000 people.