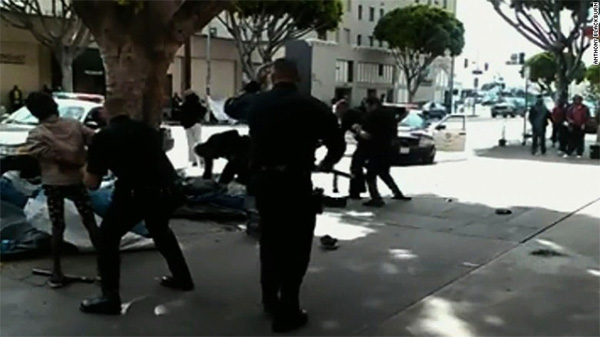 Los Angeles (CNN)– The video starts with a man swinging his arms at police outside a Los Angeles homeless shelter.

An officer tackles him to the ground, and three others try to subdue him. At least one pulls out a Taser and tries to shock the man.

“Drop the gun!” a voice yells.

The fatal shooting Sunday on Los Angeles’ Skid Row sparked renewed outrage online over what some consider unnecessary lethal force by cops. The shooting took place near the Union Rescue Mission, a homeless shelter in a neighborhood rife with poverty.

Anthony Blackburn, the bystander who shot the video, said he started filming with his cell phone after several officers surrounded a homeless man in front of his tent.

“I had my phone out, you know, videotaping the whole thing ’cause we’ve been hearing on the news about police brutality,” Blackburn told CNN affiliate KABC. “I just wanted to film it and just make sure everything was alright. But I ended up seeing a tragedy.”

Los Angeles police Commander Andrew Smith said the man was suspected of robbery. When officers tried to arrest him, he started fighting with them.

Smith said police tried to shock him with a Taser, but that didn’t work. After the man reached for an officer’s gun, three officers fired at him.

“I don’t know what they found on this individual,” Smith told CNN. “Obviously he didn’t have a firearm.”

Witness Tonya Edwards told CNN affiliate KTLA she knew the man who was shot and described him as a homeless person who had “a lot of mental issues.”

Another witness, Yolanda Young, told KTLA the man “had three Tasers on him.”

“He was down but then he jumped up, like he was juiced up, and then he started swinging at the police and they were fighting him back. … They shot him five times,” Young said.

While police struggled with the man, another tussle broke out when one officer lost his baton. A bystander picked it up.

“Get my stick! Get my stick!” the officer yelled, as other officers tackled the woman to the ground.

Blackburn said fellow witnesses were bewildered by the shooting.

“The young black officer that shot him, he went over to the crowd, telling everybody back up in an aggressive way,” he told KABC.