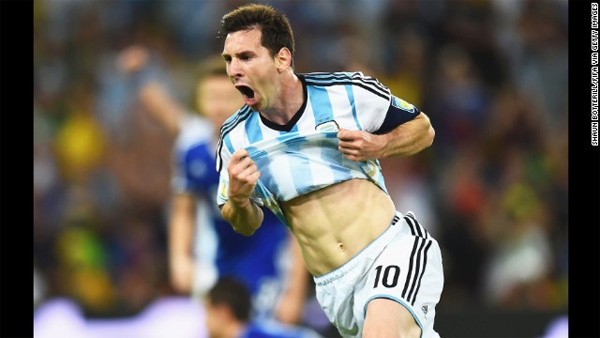 (CNN) — It was the moment the world had been waiting for, and as he has so often in his glittering career, Lionel Messi delivered.

After a frantic opening to the World Cup in Brazil with entertainment and goals aplenty, one of its gold-plated stars announced his arrival in style.

A trademark slaloming run from the Barcelona striker ended in the fashion soccer fans have become well accustomed to — with the net rippling.

In truth, Argentina were far from their best against the World Cup debutantes Bosnia and Herzegovina despite going 1-0 up thanks to the quickest goal at the World Cup to date.

Sead Kolasinac was the unwitting scorer, diverting the ball into his own net after a Messi free kick was glanced on by Marcos Rojo.

Alejandro Sabella’s men couldn’t build on that early lead though as Bosnia and Herzegovina held their own until the interval.

Argentina’s lead was doubled on 65 minutes thanks to a piece of magic from their talisman.

Messi swapped passes with Gonzalo Higuaín and sidestepped two challenges before firing home off the inside of the post via a slight deflection.

His vigorous celebration perhaps showed the pressure he was under to perform, as the endless comparisons to Argentina’s other world famous player — Diego Maradona — go on.