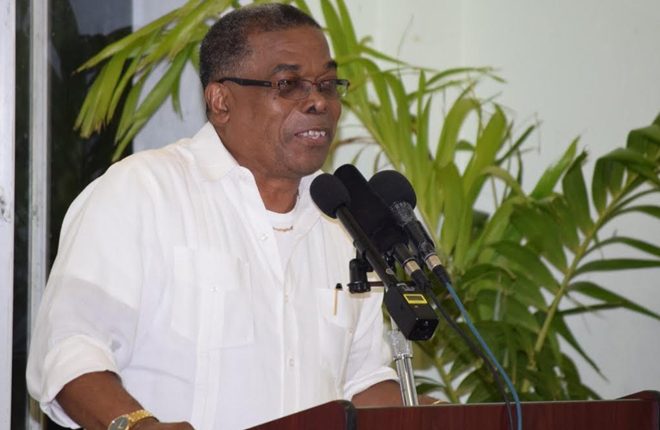 (SKNIS): Minister of Public Infrastructure, Post, Urban Development, and Transport, Honourable Ian ‘Patches’ Liburd, reiterated government’s commitment to good governance in all affairs, as he addressed members of the public at a town hall meeting on Tuesday (January 31).

Good governance has been a constant theme highlighted by the various ministers since they took office two years ago. In fact, the term is also included in the theme for this round of town hall meetings entitled “Good Governance and Accountability for Prosperity.”

Minister Liburd explained that good governance is related to the best possible processes for making and implementing decisions. He added that it also includes accountability.

“That is why we are here,” he said, during his presentation to the audience. “We are here to report to you. We are here to explain and we are answerable to you the people.”

Some topics discussed during the three-hour meeting at the Cayon Community Center included the 2017 legislative agenda, electoral reform, national security, and an update on the housing programme, which will have an official groundbreaking ceremony on Friday, February 17. Minister Liburd said the actions of the government will continue to be reported publicly in order to ensure transparency. Such measures for reporting include presentations in the Federal Parliament, and press conferences. In fact, Prime Minister, Dr. the Honourable Timothy Harris, held a briefing with the media on Wednesday, February 01, to update on a number of national matters.

Other aspects of good governance adhered to by government include broad-based participation and observance of the rule of law, which was highlighted by Prime Minister Harris in his 2017 New Year’s Day Address when he said “good governance is the norm by which we conduct the nation’s business.”

“I support the enactment of legislation to mandate … good governance [procedures] and to deter corruption,” Minister Liburd stated, adding that systems should be put in place to “compel disclosure, investigate instances of abuse, and hold those responsible to account.”