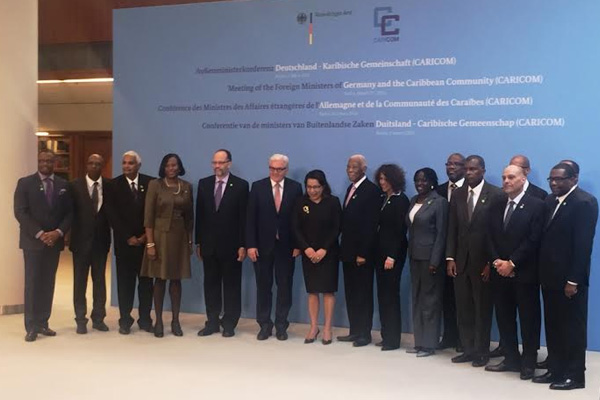 Berlin – The Honourable Mark A.G Brantley, the newly appointed Federal Minister for Foreign Affairs and Aviation of the Federation of St. Kitts and Nevis is at the moment leading a delegation to the first Conference of the Foreign Ministers of Germany and the Caribbean Community in Berlin, Germany.

The two day Conference, at the invitation of the German Foreign Minister, Frank-Walter Steinmeier, comes in advance of critically important summits in 2015 including the ll CELAC-EU Summit, the United Nations Summit on the post-2015 development framework and the COP21 in Paris. Germany has long been and continues to be a strategic ally of the Federation and the Caribbean Community on matters of global significance. Despite only being sworn in to office a week ago, Minister Brantley considered it a priority to ensure representation by the Federation given the leading role that Germany plays in the context of the European Union and in the international arena on issues of mutual interest.

High on the agenda for discussion are energy and energy efficiency, climate change and the environment, development policy and the fostering of closer commercial ties and investment flows between Europe and the Caribbean region. As a leading country in the areas of renewable energy and innovation St. Kitts and Nevis is keen to strengthen this important partnership to fully maximize the potential of collaboration between Germany and the Small Island Developing States of the Caribbean. Building on years of spirited engagement, St. Kitts and Nevis is renewing this partnership to leverage Germany`s influence to ensure that national and regional priorities are kept high on the global agenda in multilateral fora such as the G20 and the International Financial Institutions.

In the plenary session of the ministerial meeting, the German Foreign Minister called Small Island Developing States such as those in the Caribbean the “early alarm system of the world” and pledged to work collaboratively to limit the rampant and negative effects of climate change and environmental degradation. Minister Steinmeier also called for an increase in investment and capital flows between Germany and the Caribbean Community to give effect to the CARIFORUM-EU Economic Partnership Agreement which has untapped potential to contribute to inclusive economic growth for the region. The ministerial meeting provided an ideal platform to push for commitments and collective action with this key European Union Member State in the pursuit of sustainable development.

While in Berlin, Minister Brantley will use the opportunity to meet with German officials from across the German government including the Ministries of Foreign Affairs, Development Cooperation, Economic Affairs and Energy and the Environment as well as the Parliamentary Friendship Group for relations with the States of Central and South America at the German Bundestag. Minister Brantley will also meet with private sector representatives and will be hosted along with his Caribbean colleagues by the Latin America Initiative of German Business. With Germany being a global leader in industry and business, St. Kitts and Nevis hopes to foster closer ties as the Federation continues to diversify and develop its economy.

While in Germany Minister Brantley will travel to Hamburg where he will be hosted by the Government of the City of Hamburg and the EU-LAC Foundation. The St. Kitts and Nevis delegation will also meet with representatives of Kuhne Logistics University where talks will be held on energy development and logistics integration as part of economic growth.

Minister Brantley is accompanied by Mr. Eustace T. Wallace, Second Secretary at the joint Mission of the Eastern Caribbean States to the European Union and Dr. Peter Ahner, Honorary Consul of St. Kitts and Nevis based in Hamburg, Germany.