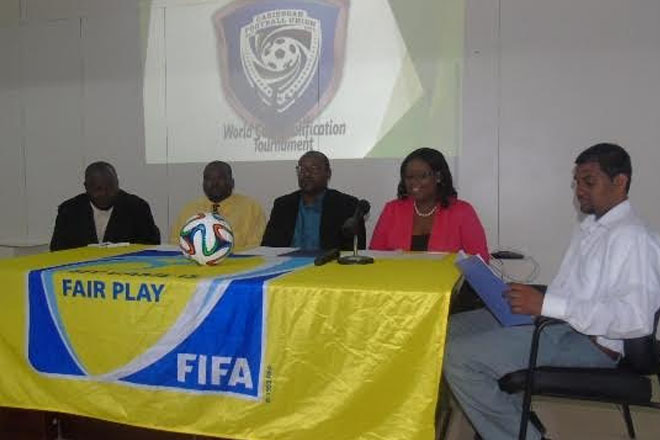 This was revealed at a press conference held at the conference room of the Youth and Sports Department on Wednesday 5th August.

Coordinator of the Youth Department, Miss Zahnela Claxton, chaired the proceedings and warmly welcomed all present.

She then made the grand announcement that St.Kitts and Nevis but more specifically, Nevis, will be hosting the FIFA under seventeen female world cup qualifying group three events. The teams that will be involved are: Trinidad and Tobago; British Virgin Islands; Dominica and host country, St.Kitts and Nevis.

Also at the head table was Mr. Jamir Claxton, Director of the Sports Department who pointed out that the upcoming event will serve to showcase the fact that Nevis can indeed host major tournaments. He stated that the plans for the tournament have been in the works for several weeks now but the announcement was delayed until Culturama was completed so that the enormity of the event would not get lost in the hype of the festival.

He indicated that his department was collaborating with the St.Kitts and Nevis Football Association (SKNFA) and is also in constant contact with the Caribbean Football Union. That body is offering guidance on the logistics of hosting such a major tournament.

He further revealed that the hotels for the various teams have already been booked and that renovation work is currently underway at the ET Willet Park, the venue for the event.

He also stated that popular Sports channel ESPN will be providing some degree of coverage for the event and urged the local fans to show up in their numbers at all of the games.

He also noted that these preliminary games will climax with the grand under 17 world cup event slated for Jordan in 2016, which will feature the 24 qualifying teams.

Permanent Secretary in the Ministry of Sports, Mr. Keith Glasgow was the official Nevis Island Administration representative at the press conference and he indicated that the government was throwing its full support behind the staging of the event. He pointed to the fact that the NIA is responsible for the renovation work at the ET Willet Park and will be assisting in the technical aspects of hosting the tournament.

He referred to the need for gender equality and gender equity and stated that he was pleased that the females will be highlighted at such a huge event. He also pointed to some of the benefits of hosting such a tournament which include: Economic value; sports development on the island and a positive thrust for young ladies to uplift themselves.

Executive member of the SKNFA, Raymond RAYBO Smith also added his voice to the proceedings and congratulated the NIA and the Youth and Sports Department for accepting the invitation to host the event and for the preparations that have been completed thus far.

He congratulated some of the Nevisian women who have already made it to the national female team and said that now younger females will have the chance to excel as well.

He urged the Nevisian public to give their fullest support to the staging of the tournament.

Marketing officer of the local organizing committee, Vijay Harinarine, gave some more details on the tournament:

Game dates will be the 22nd; 24th and 26th of August. There will be a double header each night with the first match starting at 6pm and the second scheduled to commence at 8 pm.

Tickets are on sale at $10.00 per night at the Youth and Sports Department, situated at the Reliable Motors Miniplex. However, persons can purchase season tickets for just $25.00.

He took time out to thank the sponsors who are already on board: The NIA; the Four Seasons Resort; the SKNFA; Carino Nevis ltd; Horsfords; Oualie Beach Resort; Philsha’s guest house and Riviere House.

He also urged other business places to come forward and assist in sponsoring the event.

He stated that his marketing committee will be hosting certain radio programs, complete with giveaways, in order to promote the event and will climax with a major promotion in the heart of Charlestown, the Friday before the event commences.

He further encouraged the general public to stay informed of the event by visiting the department’s website at www.dysnevis.org or their face book page which is Department of Youth and Sports Nevis.

The persons at the head table then fielded questions from members of the press present.