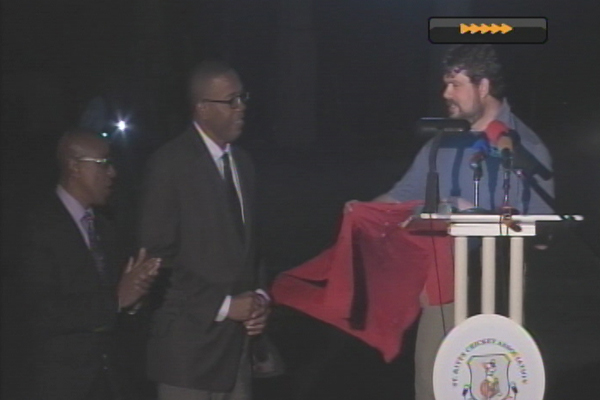 [ZIZ]–Last night at the unveiling of the new multi-million dollar lighting and visual media facilities at the Warner Park Cricket Stadium, Chief Executive Officer of Prahaba International Inc, Raj Walia, spoke of the vision of the St. Kitts-Nevis government, and in particular Minister of Sports Glenn Phillip.

Walia, the designer of the lighting and visual media facilities at Warner Park, described in detail the details leading up to the final reveal of the new lights and jumbotron on Thursday night.

In the early stages of planning the project, he said the mandate given to him by Minister of Sports, Glenn Phillip had been simple: “Deliver a Dream.”

He noted the uniqueness of the upgrades, as Warner Park now stands out as the only stadium in the world with a twin pole lighting system and one of only five sports facilities anywhere to boast similar lighting and media infrastructure.

“We designed a twin pole lighting system that does not exist anywhere in the world,” Walia revealed, while giving an overview of the project. “This lighting pole has 75 lights or fixtures on it, each delivering 2,000 watts of energy. When all four poles are in full effect they deliver 3,700 lux of light on the wicket. I don’t know any other grounds that have that.”

A stand out feature at the grounds is the massive two trillion-colour, high definition jumbotron on the western side of the grounds.

“There are only five of these in the world” he stressed. The other four are located in South Africa, Australia and two are in India. “It can deliver two trillion colours. During the day it is beautiful and at night it looks spectacular.”

A state of the art back up power generation system is a new feature of the Warner Park Stadium, created specifically to support the infrastructure installed.

Construction of the lighting and visual media infrastructure at Warner Park was completed ten months after the project began.