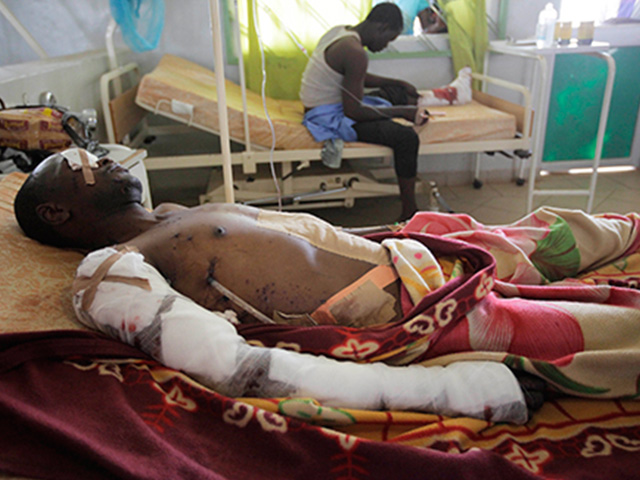 JOS, Nigeria (AP)– Islamic militants killed 48 villagers in northeastern Nigeria near the town where they kidnapped 300 schoolgirls, and the US said Wednesday it was sending in 80 military personnel to expand the drone search for the captives.

The developments came hours after twin car bombings claimed at least 130 lives in this central city in an escalating campaign of violence blamed on the Boko Haram terrorist network and its drive to impose an Islamic state on Nigeria.

The three villages attacked overnight Tuesday and early Wednesday are near the town of Chibok, where the girls were abducted from their boarding school in a brazen April 15 assault that has ignited a global movement to secure their freedom.

On Wednesday, President Barack Obama announced that the US was sending in 80 military personnel to help in the search for the missing schoolgirls. In a letter to House Speaker John Boehner and the Senate, Obama said the service members were being sent to Chad, which borders northeastern Nigeria, to help with intelligence, surveillance and reconnaissance aircraft missions over Nigeria and the nearby region.

The US mission will help expand drone searches of the region, said Lt Col. Myles Caggins, adding that this latest deployment will not be involved in ground searches.

The drone will be used in addition to the unarmed Global Hawks already being used, a senior US official said. The new flights will be based out of Chad and allow the military to expand its search effort, said the official, who spoke on condition of anonymity because he was not authorized to discuss the matter publicly.

The government of Nigerian President Goodluck Jonathan has come under intense national and international criticism for its lack of progress in rescuing the 276 schoolgirls. Besides the United States, Britain, Israel and several other nations have offered assistance in the hunt for the girls, amid fears they would be sold into slavery, married off to fighters or worse, following repeated threats by Boko Haram’s leader.

The insurgents have demanded the release of detained Boko Haram fighters in exchange for the girls â?? a swap officials say the government will not consider.

Boko Haram, whose name means “Western education is sinful,” has targeted schools, as well as churches, mosques, marketplaces, bus terminals and other spots where large numbers of civilians gather in its violent 5-year campaign to impose Islamic law on Nigeria, whose 170 million people are half Christians and half Muslims.

During the latest attack on three northeastern villages, terrified residents said they hid in the bush and watched while Boko Haram fighters set their thatched-roof mud homes ablaze.

“We saw our village go up in flames as we hid in the bush waiting for the dawn. We lost everything,” Apagu Maidaga of the village of Alagarno told The Associated Press by telephone. The nearby villages of Bulakurbe and Shawa also were attacked.

In Jos, site of two powerful car bombings Tuesday in a crowded bus terminal and market, rescue workers with body bags combed the rubble for more bodies as scores of residents gathered at mortuaries and hospitals in the search for missing loved ones.

Officials reported an additional 12 deaths from the blasts: Seven mutilated bodies were recovered from the scene and five of the wounded died in the hospital.

Most victims were women and children who worked in the market as vendors, said Mohammed Abdulsalam of the National Emergency Management Agency. “We expect to find more bodies in the rubble,” he said.