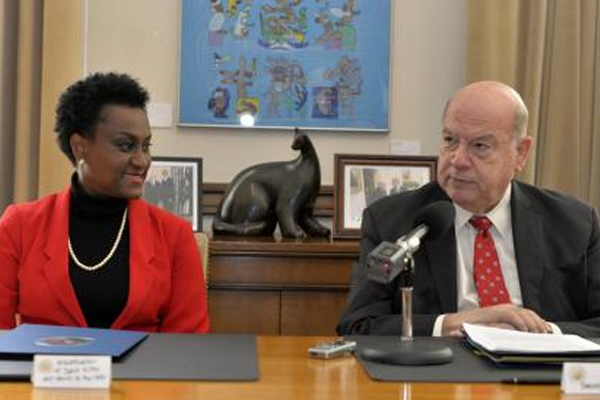 Washington, USA — The Organization of American States (OAS) will send an election observation mission (EOM) for the general elections in St Kitts and Nevis to be held on February 16, according to the agreement signed on Friday between the Pan-American institution and the government of the Caribbean country at the Organization’s headquarters in Washington, DC.

The OAS secretary general, José Miguel Insulza, recalled that it is the third time the organization will send an EOM to the Caribbean nation, and announced the appointment of Ambassador Frank Almaguer as chief of mission. The OAS leader recalled that during his tenure, the Organization has sent more than one hundred EOMs to countries throughout the hemisphere, and reaffirmed the commitment of the Organization to undertake a comprehensive and professional mission in St Kitts and Nevis.

“Electoral observations for us are very important and I can assure you, Madame Ambassador that we will have a mission up to the requirements of your country and of your democracy,” he said, addressing the permanent representative of St Kitts and Nevis to the Organization, Jacinth Lorna Henry-Martin.

Henry-Martin, meanwhile, said it constituted an “honour and privilege” to sign the agreement for the OAS to send an EOM to her country to observe the general elections.

“I believe that this will constitute another rung on the ladder of successes we´ve had in the execution of elections that prove that we want to remain among the ranks of those that honor and respect what democracy represents, not only for our nation, but for our peoples,” she added.

The agreement signing ceremony was attended by Almaguer, who was US ambassador to Honduras from 1999 to 2002 and OAS Secretary of Administration and Finance between 2005 and 2010; the OAS Director of the Department for Electoral Cooperation and Observation, Gerardo de Icaza Hernández; and representatives of the missions of member countries to the OAS.