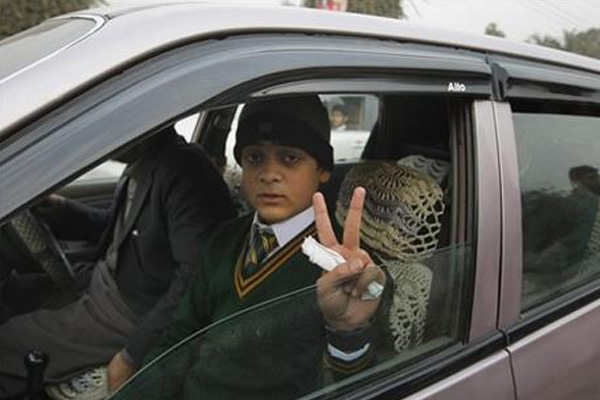 Peshawar, Pakistan (AP) — Pakistani children returned on Monday to the school where Taliban gunmen killed 150 of their classmates and teachers last month, clutching their parents’ hands tightly in a poignant symbol of perseverance despite the horrors they had endured.

It was the first time the school had reopened since the assault and security was tight. The nation has been reeling from the December 16 terrorist attack in Peshawar — one of the worst Pakistan has experienced. The violence carried out by seven Taliban militants heaped pressure on authorities to end the stubborn insurgency that kills and maims thousands every year.

The massacre also horrified parents across the nation and prompted officials to implement tighter security at schools.

For Peshawar parents like Abid Ali Shah, Monday morning was especially painful as he struggled to get his sons ready for school, something his wife used to do. She was a teacher at the school and was killed in the violence. Both of his sons attended the school. The youngest was shot in the head but survived after the militants thought he was dead.

“A hollowness in my life is getting greater. I am missing my wife,” Shah said. He said he had wanted to shift his children to a different school or city but decided not to because they still have to take exams this spring: “Everything is ruined here, everything.”

His older son, Sitwat Ali Shah, 17, said that when he saw his brother break down in tears as they prepared to go to school he did as well. Sitwat said both he and his brother have trouble sleeping and often wake up, crying for their mother.

“Those who have done all this to all of us cannot be called humans,” Sitwat said, adding that he still wanted to go back to school and eventually become an air force officer.

A ceremony was held at the school to mark its reopening, and classes are to resume on Tuesday. Security was tight, part of a countrywide effort to boost safety measures at schools in the wake of the attack.

Schools around Pakistan have raised their boundary walls, added armed guards and installed metal detectors, although many have questioned why it took such a horrible attack to focus attention on school safety.