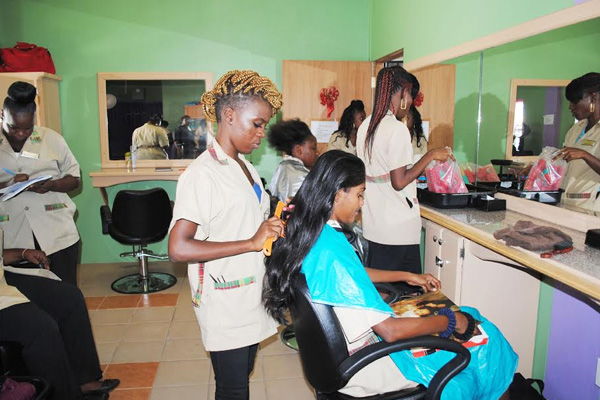 Basseterre, St. Kitts — The establishment of the People Employment Programme (PEP) School of Cosmetology has proven to be a significant development as it has allowed for the holistic training of trainees in the cosmetology discipline, who are now ready to receive actual clients at their salon.

PEP’s Training Coordinator, Mrs Celia Christopher, says that the School of Cosmetology which was opened in November last year at the Newtown Community Centre in Basseterre by the Deputy Prime Minister the Hon Dr Earl Asim Martin has a state-of-the-art salon from where the trainees have been doing their practical work.

“This has been a significant development in terms of PEP, because in all of the training that I have done you do not see this level of investment in a training programme,” observed Mrs Christopher. “I am happy for that because what they speak to is that you are looking at holistic training for the trainees – no piecemeal approach.

The PEP Training Coordinator made the remarks last week when she reported that three of the four cosmetology classes at the Newtown Community Centre which are doing the Caribbean Vocational Qualification (CVQ) Level I training have only two units left before they are assessed for certification.

Senior PEP Facilitator in Cosmetology, Ms Juliette Queeley, says that the trainees have come through all the levels of training, starting from when they knew nothing, to the present where that are able to handle anything in their chosen field.

According to Ms Queeley, who works alongside two other facilitators, Mrs Amoy Arache and Ms Petra Newton, the trainees are at the point now where they can cut hair and do shaving. They have been using the salon to practice on each other.

“They have two more units before they finish, which is chemical usage and colouring which is temporary and permanent hair colouring, then they are on the way,” explained Ms Queeley. “They are here between notes and practical work, we are trying to balance the two.”

The facilitator observed that since the PEP School of Cosmetology has its own salon, the trainees do not have to go outside to do practical work. This has put them at an added advantage that has seen them upgrade their own status in their field of training.

“We are now moving to a new level as we will have people, real clients, coming to the salon to have the service done,” said Ms Queeley. “We are getting there, this will be in under a month. The school has grown from since inception to now, because we now have four groups.”

Ms Queeley says that there is a great future for the trainees because once they are through with their training they can form partnerships and open their own businesses. She said that would work out very well because some of them are very good in different areas.

“Some of them are very good with hair, some are very good with braiding, hair cutting, roller setting and things like that, and then you have some who are excellent with the nails,” explained Ms Queeley. “So they can all specialise in their own little areas and come together under one roof to give that service.

“They could also go and be employed by established practitioners. Some of them would like that. Some of them have said that they will go and work and try to build their clientele, and then you have the daredevils who will go for it off the punch.”