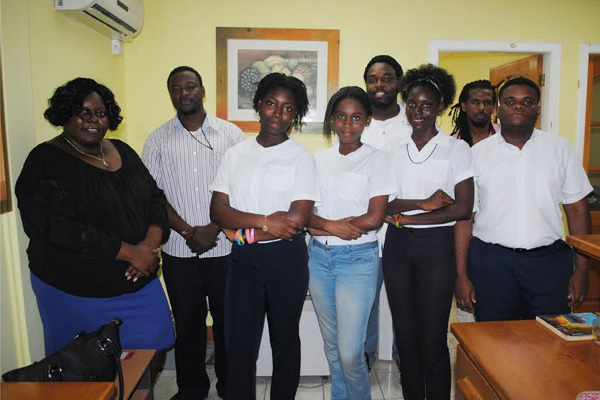 Three teams participated in the local challenge named CODE SKN Sustainable Challenge 2014, two of which were made up of PEP Graphic Design trainees. The winning group had four members from the CFBC and two members from PEP, and will be travelling to Suriname for the regional finals to be held October 6-10.

CODESKN Sustainable Challenge 2014 is part of a much broader regional activity under the umbrella of AgriHack Talent Caribbean, which is an initiative funded and supported by the Technical Centre for Rural and Agriculture Development that is an ACP/EU institution based out of the Netherlands.

AgriHack Talent Caribbean initiative, which was launched in July 2014, is an ICT & social innovation and youth entrepreneurship programme that has a mission to advance food and nutritional security, increase prosperity and encourage sound natural resource management in the African, Caribbean and Pacific (ACP) countries.

According to local organiser, Ms Telly Onu, Managing Director of Quintessence Consulting, the event started on Monday September 15 with a two-day training with assistance of Microsoft, and final presentations were done in front of a panel of judges on Saturday September 20. There were six challenges and each of the three teams worked on one.

“Team one focused on Climate Change and Water Management,” said Ms Onu. “The second team which was #TeamCode SKN focused on an application called Next Harvest and their application targeted production information for farmers and pesticide management. The third team focused on market access for agriculture and agribusiness.”

Team 2, named #TeamCode SKN, was made up of Ms Zoe Quinlan, Ms Zahrea Franklin, Ms Jonella Pemberton and Mr Delano Esdaille from the CFBC, and Mr Veshawn Bolus, and Mr Jervin Vanterpool who are members of the PEP Graphic Designer class. Their project name was Next Harvest.

A member of Team 1, Ms Vernecia Wyatt said that they would have learnt a lot by taking part in the competition as they learnt how to create their own websites and creating apps. “The competition was to create an app and a website,” explained Ms Wyatt. “It was very nice, I would do it any time in a heartbeat. It was a good experience, and next time we will win.”

A member of Team 2, Mr Jervin Vanterpool from PEP, explained that he and a colleague Mr Veshawn Bolus were working on a web based app as a two-member team, and they had decided to name it SKNFarmers. The app would have helped persons do more farming and do more research digitally as opposed to having a book in front of them or in the pocket every minute.

However, realising that they did not have enough time, they approached the CFBC team and asked if they could join them and their request was granted and hence the formation of the six-member Team 2.

“We designed an app named Next Harvest,” said Ms Jonella Pemberton of Team 2. “Our member Zoe made the presentation on how the app was designed. We had prototypes as well to show the judges how the app would work. We had the best business model as well and the best presentation.

“The two PEP persons asked if they could join our team and we agreed. Mr Vanterpool said that his strong points were in designing and marketing while ours was in programming. We accepted them to be members of the group.”

Ms Vanessa Carey, manager of Team 3, all from PEP, said that they did research on challenges that face Caribbean farmers and they put forward some solutions especial as it relates to soil and crop management that could help turn around farming in the region.

“Our website is ready, although it was not ready on the final day of the competition,” explained Ms Carey. “The website is called ‘freshstartfarming’ – it is a wok in progress. We already have it working, so you can go on the site but there isn’t much on it so we still put up stuff on it.”

At the end of the competition, Team 2 was adjudged the winners, followed by Team 1, and Team 3 in that order. For their effort, Team 2 won US$1,000 and will travel to Suriname for the finals.

“In Suriname we are expected to develop the app more, for it to be more functional and we are actually trying to finish it so that it can actually go into play-stores and to make our presentation more reliable,” explained Ms Jonella Pemberton.

According to local organiser Ms Telly Onu the Managing Director, Quintessence Consulting, regional finals involving eight teams will be held in the framework of the Caribbean Week of Agriculture organised by the CARICOM Secretariat and Caribbean Ministries of Agriculture in October 6-10 in Suriname.

Regional prize will be €5,000 first prize, €4,000 second prize, and €3,000 third prize, plus the winning team will also get an amount allocated for them for business incubation support, commented Ms Onu.