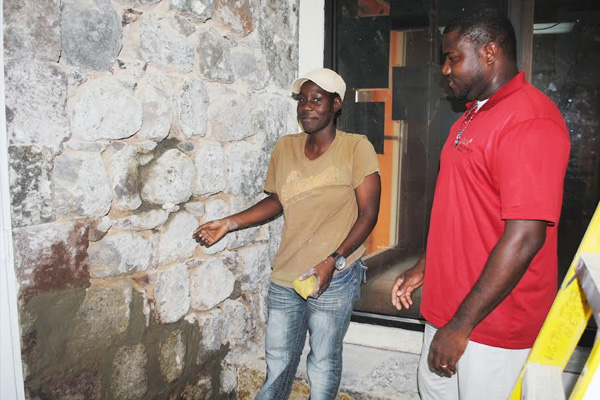 Basseterre, St. Kitts — As the People Employment Programme (PEP) Secretariat makes arrangements to relocate from its present location in Dorset to Church Street in Basseterre, Project Manager Mr Geoffrey Hanley is lauding the work that is being done by members of the Women in Construction Trades (WICT), a division of PEP.

“After the programme has been rolled out for almost two years, it is time for us to do some reorganisation as we endeavour to make it sustainable,” explained Mr Hanley. “So part of that sustainability is the movement of the PEP Secretariat.

“While the secretariat has been on the outskirts of Basseterre in Dorset, we are trying to make it more accessible by our young people and in so doing we are going to be housing it on Church Street where the Department of Education used to occupy.”

The offices were left vacant after the Department of Education moved to the Stanford Building at the Robert L. Bradshaw International Airport. However, that movement was occasioned by the fact that the building had moulds that rendered it uninhabitable.

To make the offices habitable, a local contractor Mr Elbert Pemberton was given the job by PEP to renovate the offices and clean them by removing all the moulds, and this is where three members of Women in Construction Trades have come in.

“All of the employees Mr Pemberton is using at the work site are from the People Employment Programme which is very commendable,” noted Mr Hanley. “The Women in Construction Trades are the ones who are basically leading the renovation in terms of doing the breaking down, the plastering, the painting and that kind of stuff.

“That in itself is satisfactory in the area of how the programme intended to be taking our young people, especially women who are now excelling in trades that are traditionally considered a male domain.”

Three WICT members Ms Tiandra Browne, Ms Fayola Henderson, and Ms Khalia Harris, who are currently attached with Stone Deals, a local company based in Bourryeau under PEP Facilitator and CEO of the company Mr Heston Hamm, are the ones working with Mr Pemberton at the Church Street offices.

“The building needed renovation and cleaning up for office use,” observed Mr Elbert Pemberton. “We have five office spaces and one main open office space, we have a storage space and we have a kitchen to be repaired.

“The work is tough and I have four personnel from PEP, three ladies and a man. The gentleman Mr Patrick Richards he is attached to my workplace, but the ladies are attached to Stone Deals.”

According to Mr Pemberton, the job entails pulling down the partitions from the stone wall because they were of sheet rocks and would have over the time taken in moisture making the stonework damp and hence the moulds. They have taken off floor boards and the plywood ceilings for replacement, and are currently applying new plaster to the walls.

26-year-old Tiandra Browne of Saddlers Village has taken the job very well and says that she wants to learn more and is thankful to PEP for having given her the opportunity to do what she had shown interest in while still in high school, where she excelled in Technical Drawing.

“The training I have received at PEP is helping me expand more and learn more about different types of skills,” said Ms Browne. “It is not just one skill you have to learn, you have to learn more than one, because when you want to start looking for a job you could get some of the jobs available in the market because you have different skills.”

The relocation by the PEP Secretariat to the Church Street location will be a boon to the operations of the People Employment Programme, which is a department of the Ministry of Youth, and its sister department, the Department of Youth which is housed in the same building.

“One of the other reasons PEP is relocating is the fact that I am still the Director of Youth,” observed the PEP Project Manager Mr Geoffrey Hanley. “Managing both departments, by bringing the People Employment Programme down on Church Street, would be much more manageable in the sense that I will be in the heart of both of the departments.

“In itself I would be more accessible because there are times when people would come to look for me at the PEP office when I am at the Youth Department, or vice versa. So this would now give me an opportunity to be able to meet more persons when they need to see me.”