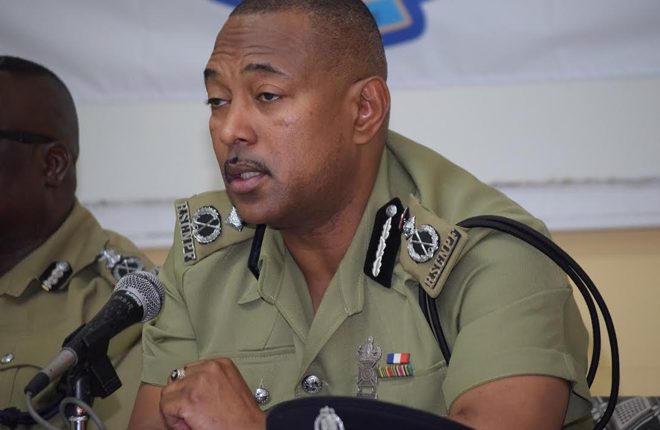 (ZIZ News) — Police Commissioner Ian Queeley says members of the Police High Command including himself are fully welcoming the introduction of new technologies that can bolster the prevention and reduction of crime in St. Kitts and Nevis.

He made the statements while speaking at the recently held Commissioner’s Press Conference on Thursday.

The Commissioner said, “2017 will see the continued embrace of new technology, the roll out of the enhanced CCTV system providing for more coverage of our communities. As we speak, officers are currently in the Republic of China (Taiwan), being trained in a “real world” dynamic environment on the use of this system and we would want to give our thanks to the Ambassador and staff of the Embassy of the Republic of China (Taiwan) to convey to the government and people of the Republic of China. Additionally, the use of unmanned air assets (drones) will be rolled out later this year to assist with our fight in crime.”

In relation to the protection of the Federation’s vulnerable borders, the Police Commissioner stated, “We have engaged our partners in efforts to find and embrace best systems to enhance security in that regard.”

During the Team Unity government’s two-year anniversary celebrations, the Crime Reporter (Report A Crime) app was one of five additional applications launched as part of the government’s E-Government initiative.

The Commissioner also used the opportunity to give background information on the app’s features.

“Crime reporter allows for interaction between citizens and the police for the reporting of crime, be it active, past, or future. The app can be downloaded from the store (google play or the apple store) that supports your smart phone. This app does not replace crime stoppers; additionally it augments it and provides an additional medium to report crime”, the Commissioner explained

Queeley said the police force will continue to incorporate good forensic practices in building cases for prosecution, and as such praised the addition of Mr. Narace Ramnarine as the new head of the forensic services unit.

“He has been with us for a little over a month, and Mr. Ramnarine comes with years of the requisite experience, and he has had an immediate impact with his leadership and management in that department”, the Police Commissioner expressed.